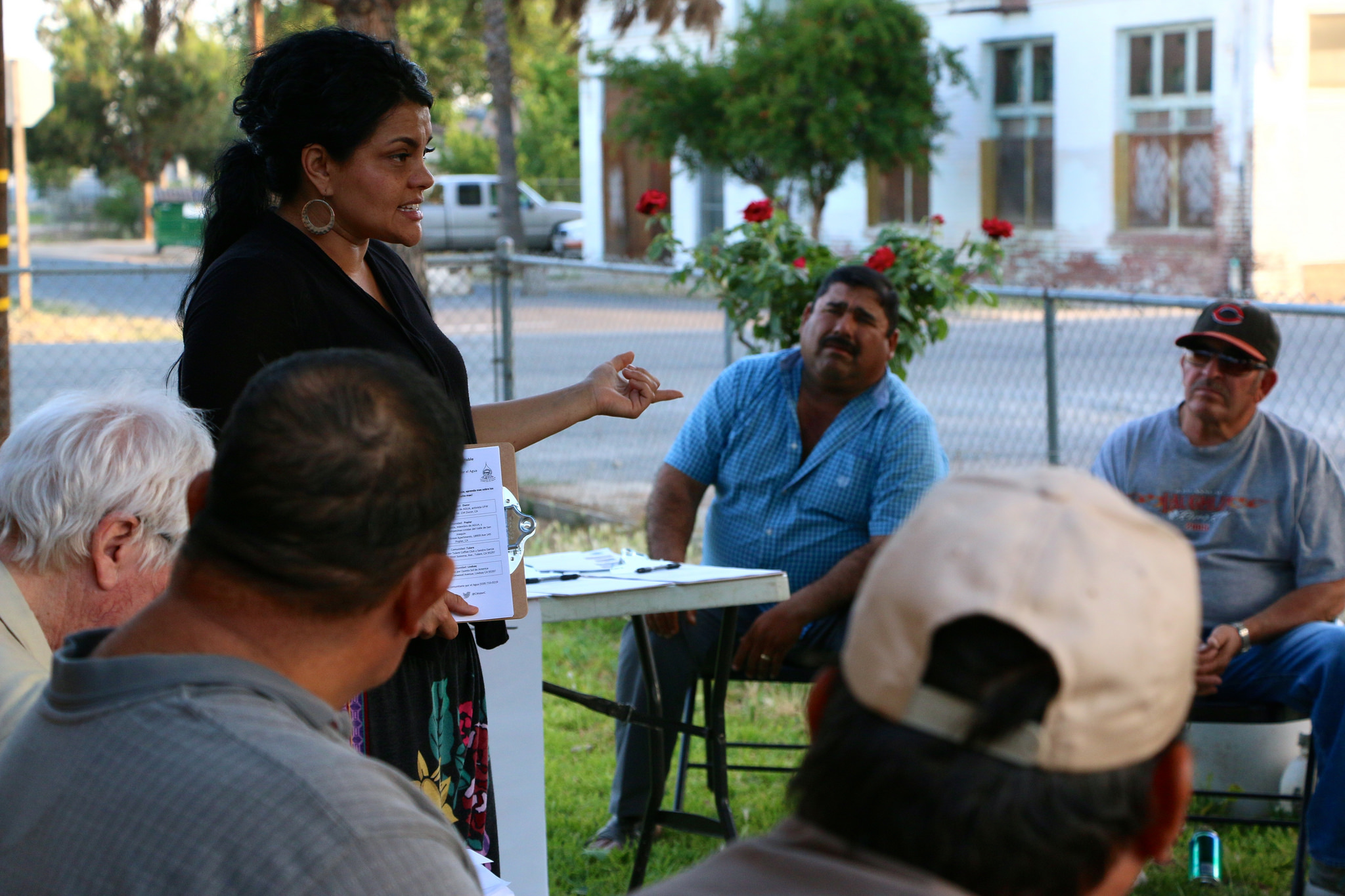 She started by knocking on doors 10 years ago, and now De Anda helps low-income residents fight for water and their own health in the San Joaquin Valley

Susana De Anda has taken her passion for social justice and turned it into an effort to assist members of her community by providing access to clean drinking water. As co-founder and co-executive director of the Community Water Center, based in Visalia, California's San Joaquin Valley, she has helped create tools that give members of a largely agricultural region the chance to be heard.

Through education, activism and advocacy, De Anda and the Community Water Center strive to uphold the basic human right to affordable, clean water. The challenge is all the more complicated in these times of drought and shortage. In negotiations over who gets what little water is available, De Anda works to make sure the community has a seat at the table and that human health is a priority.

Since its inception in 2006, the Community Water Center and its partners have created regional plans to guide decision making, they have secured a role in implementing the Sustainable Groundwater Management Act (SGMA), and are working to support policies that benefit the San Joaquin Valley and Californians as a whole.

Water Deeply: How did you first get interested in water? Was there a pivotal event?

Susana De Anda: I came from a background in environmental justice, and California had a huge water-quality problem that needed to be addressed, which was focused in disadvantaged communities in the San Joaquin Valley. In 2006, Laurel Firestone (co-executive director, and a member of Water Deeply’s board of advisors) and I were going door-to-door and found many people who could not drink the water coming from their taps. It became a catalyst for advocacy in low-income communities to provide clean water, which is a basic human right, not a privilege.

There was a language barrier, and governance barriers in the form of cancelled water board meetings. Families were being impacted. There was a huge need discovered for organizing and basic education in the community. The amount of calls we were getting was out of control. In 2005-06, it became clear it was more than a campaign and we started the Community Water Center.

Water Deeply: What’s this about cancelled water board meetings? What happened and why is that a problem?

De Anda: Many (water agency) boards here didn’t need to have a quorum present to hold a meeting. Sometimes they were canceling because they didn’t have enough people present; sometimes they cancelled and there was no explanation.

It was really frustrating because there was no notification of their canceling to the residents, and this was people’s only chance to ask why their water tasted funny or to find out more about their water.

Water Deeply: You are based in a major agricultural region. What are your thoughts on the responsibility of agriculture in promoting access to safe drinking water?

De Anda: We are a farm-based community. This is an area of thriving agriculture, and people in the region need to work together to make sure all solutions are sustainable.

Water is food. We have to work together, and we don’t have to necessarily agree, but we all need water. Actions have consequences, and we need to prioritize health over power and greed and understand the impacts of our actions. We need to share our resources.

Water Deeply: What do you mean by power and greed? Is water not being distributed fairly?

Access to safe drinking water is not equitable. Groundwater is heavily contaminated and treatment is not affordable. Ratepayers are responsible for paying for treatment and they can’t afford it. There are nitrates and arsenic in the water that have no smell. Boiling it only increases the concentration.

This is a heavily agricultural community and these are farm workers being affected. Farm workers have to be able to thrive to work in the fields. 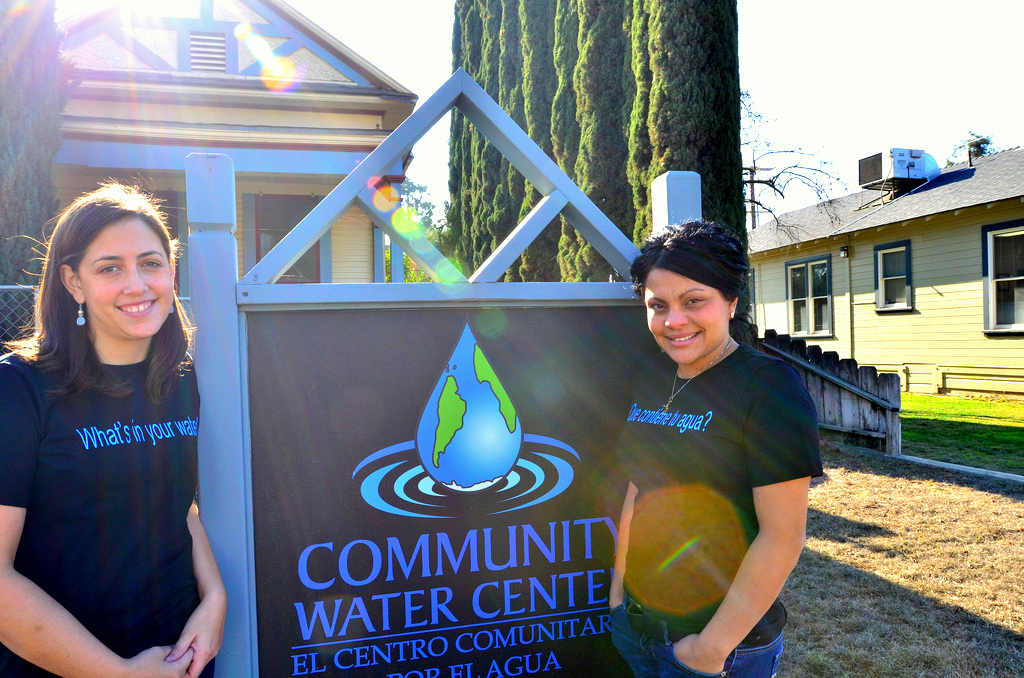 Water Deeply: How do you reach the people you serve? Are they uniquely affected by the drought?

De Anda: We’ve organized committees because, when you get a group of people together, it’s more powerful and less threatening to face things as a group. The AGUA program committee is comprised of residents, works with residents and continues to meet on a monthly basis. Many of these people are on water boards now. The people on the committees go back into the community and spread the word.

It’s been 10 years since the water campaign where we went door-to-door knocking. People call because the information is out on the ground and they hear about it from the media. So it’s a combination of organization, education, the committees and the media – they see us on TV.

They are not uniquely affected – the drought just worsens the conditions that people have already been living in for decades.

Water Deeply: How has the drought affected the people in your community and the work you do at the Community Water Center?

De Anda: The drought just exasperated the conditions that have been around for decades and has hit disadvantaged communities the hardest. It has served to increase awareness. Wells going dry, and increased concentration of contamination, have brought more attention to the problem and have resulted in more funding.

With the drought, there are less sources of drinking water such as rain and snow melt. People are relying on groundwater more and, with major overdraft, it’s affecting drinking water supply.

Wells have run dry or are running dry. People have had to adjust to no drinking water for over a year, although water quality has been a problem for decades. They have to rely on a tank outside their home that they have to refill with buckets. Some people are paying twice for water or are paying a much higher rate for water than other areas.

The general public needs to understand that supply and quality are issues that go hand in hand. It’s important for people to understand they both have to be considered simultaneously, but we need to prioritize health of people and their families.

Interim solutions are not a success. We need to prioritize for basic necessities of what we need to live.

Water Deeply: What are some of the programs at the Community Water Center that you consider a success?

De Anda: We concluded the Tulare Lake study two years ago. It was a project which included diverse stakeholders and identified the problems in the region and potential solutions.

Also the northern Tulare County governance structure — we have seven disadvantaged communities in the region who have problems with contaminated water. The communities receive surface water through Alta Irrigation District at reasonable rates. It’s a partnership with the farmers in the district.

And we continue to work on SGMA with various stakeholders to develop the tools we need to proceed.

Water Deeply: What do you feel are the best tools for advocacy at the level of the individual who perhaps doesn’t speak English or have access to decision makers?

De Anda: Some people in the community get discouraged that it’s too difficult to understand the issues around their access and right to drinking water. They can’t understand the language needed to learn more or to be comfortable with understanding the water quality reports.

All human beings have the right to drinking water. When a water board does not provide information in a language that is understood by the community, that’s not OK. Some do provide money in their budgets for translation services. It is a law that emergency notifications be provided in the necessary language if the community has over 10 percent of people residing there speaking only that language (CaliforniaHealth & Safety CodeSection 116450-116485).

De Anda: Proposition 1 is very significant and instrumental in Spanish speaking communities for drinking and wastewater concerns. The governor’s drought relief package has been very helpful in providing funding. Proposition 1 is providing key targeted funding. A half a million dollars in funding is geared toward low-income communities of color.

The Sustainable Groundwater Management Act (passed into state law in 2014) has been instrumental in generating funding and attention to problems such as (water) rates and board meetings not being held. We continue to work on SGMA with the stakeholders to identify tools needed to proceed and to prioritize public health.

Water Deeply: What is it that keeps you motivated to continue working on these complicated water issues?

De Anda: What we do is very real. It’s a personal commitment that is very rewarding and you don’t stop thinking about it after work when you go home. There are faces to it – families, children. It’s a privilege to do what we do.