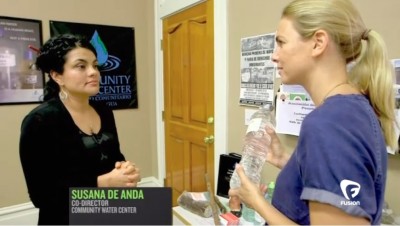 (12/09/13) Berta Diaz doesn’t drink or cook with the water that comes out of her tap. That’s because she received a letter from the Tulare County Department of Health telling her the water was contaminated. “Public Notice: Nitrates,” it read in big black letters.

According to the Community Water Center, a local advocacy group, Diaz’s central California community has dealt with nitrate levels above the national standard intermittently for nine years. The contaminant can cause “blue baby syndrome,” a condition that can result in sudden infant deaths, as well as some kinds of cancer, skin rashes and birth defects.

“I’m a single mother, I raised four kids,” Diaz said in Spanish. “I work in the fields, but I think I deserve clean drinking water. It should not be a privilege.”

But for many in the Central Valley, which produced about $34 billion in agricultural revenue last year, it is. A 2012 study by UC-Davis researchers found that one in 10 people in the valley are at risk of drinking water with unsafe nitrate levels, and that about 1.3 million people in the Central Valley face increased cost because they must buy drinking water. The Community Water Center estimates that about 1.36 million people in the valley could be drinking tainted groundwater, based on data collected by the State Water Resources Control Board.

“It’s bad and it’s only going to get worse,” says Jay Lund, director of the UC-Davis Center for Watershed Science and the lead researcher on the study.

That’s because 90 percent of the tap water in the valley comes from underground wells, which pull from water tables contaminated from decades of industrial farming. According to Lund’s study, 96 percent of the contamination is caused directly from farming — especially from nitrate-rich synthetic fertilizers used throughout the valley.

This kind of agricultural runoff has historically not been regulated.

Diaz’s home, in Tulare County, is in one of the affected areas. She estimates that she spends about 10 percent of her income on water since she buys bottled water for drinking, cooking and even bathing her two-year-old grandson, who she says gets rashes when she uses water from the tap.

Diaz says she could use that money to buy, “shoes for my daughter, a little more to eat. Things that other people have and we don’t.”

In 2011, a United Nations investigator came to the Central Valley on a tour of places around the world with contaminated drinking water. The investigator stopped in Seville, California, an unincorporated town of 350 with a median income of $14,000.

Chris Kemper is the principal of the town’s lone elementary school. “What we’ve decided to do is shut off the water that comes from the city, from the well over here,” says Kemper. “Then we decided to bring in bottled water for the students.”

His tiny rural school — one of the poorest in the state — spends up to $600 a month on drinking water because nitrate levels there fluctuate between safe and unsafe levels. It was supposed to be a temporary solution, says Kemper, but five years after shutting off the water fountains, Seville’s toxic water problem has still not been solved.

It may be too late to clean up the groundwater in Seville.

“At this point, it’s almost impossible to reverse the contamination,” says Lund. The answer, he says, is to treat the water that comes out of the tap instead.

The UC-Davis researchers estimate it would cost between $20 and $36 million over the next 10 years to build enough water treatment systems to provide clean drinking water to the valley.

Lund said the small towns in the Central Valley aren’t able to meet that cost.

“They just don’t have the money to do it. It’s very expensive or there are not very many people in their system to spread that cost around.”

Despite the costs, the problem, advocates say, is fixable. “This contaminant was man-caused, so humans can fix it,” insists Susana de Anda, co-founder of the Community Water Project in Visalia, Calif. Part of the solution, says de Anda, is “making sure that funding agencies are actually prioritizing our communities without safe drinking water.”

That responsibility lies mainly on the shoulders of the California Department of Public Health, which does not regulate contamination, but is charged with making sure the water that flows from the tap is clean and safe.

The Environmental Protection Agency provides the agency with a revolving grant to ensure that the poorest communities in the state receive funds to provide clean drinking water. To date, the EPA has given California some $1.5 billion in funding.

But California has been slower than any other state in spending the funds. In April, the EPA sent the state Department of Public Health a notice, holding them in non-compliance of the Safe Drinking Water Act, and warned the state that funds would be cut if they weren’t put to use.

The state Department of Public Health declined an interview with Fusion, but said they have submitted a corrective action plan to the EPA to spend the remaining funds in a timely manner.

For now, some of the poorest people in California are stuck paying double for clean water.

“This is America, the United States. Why would people have to put up with that?,” says Chris Kemper, the principal at Stone Corral Elementary, where the water is undrinkable. “We’re not talking about boxes, we’re talking about human beings that we’re delivering this water to. And people in this day and age find that acceptable. I think it’s sad.”

Schools Nitrates Contamination Groundwater Funding
Like us to spread the word