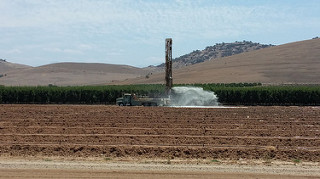 Nitrogen is essential for growing crops and producing food, but too much of it pollutes the water and air.

A new assessment looks at nitrogen’s impact in California and how it’s affecting human health and the environment.

The California Nitrogen Assessment Report shows that as the global demand for food has increased, so has the use of fertilizers- both organic and synthetic. But California crops use only a half to a third of all the synthetic nitrogen applied. Nearly 419,000 tons of nitrogen leach into groundwater every year.

“Managing nitrogen in the ag sector so that the nitrates going into groundwater start to net out zero or negative is a big challenge because we’re nowhere near being in balance,” says Tom Tomich, founding director of UC Davis’s Agriculture Sustainability Institute and the report's lead author.

He says options for managing all that nitrogen are limited.

“If they were available, cost-effective, and easy to use farmers would already be using them and in fact farmers are using a lot of them. But even if we used everything we’ve got, we’d still have two-thirds of the nitrate to groundwater problem.”

Tomich says it takes several years to centuries for nitrogen leached into the soil to enter the groundwater. He says contamination will continue to increase in the future.