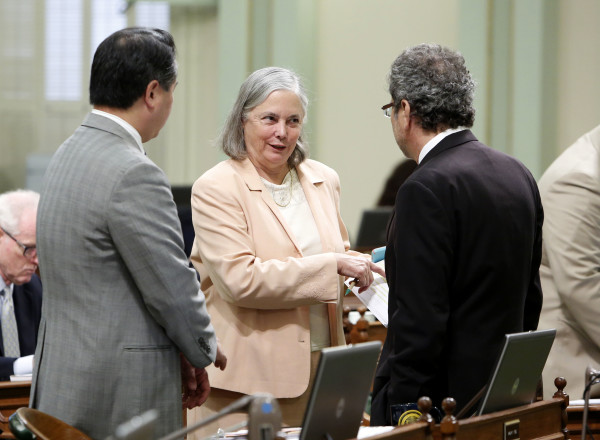 By Tom Knudson, The Center for Investigative Reporting
March 24, 2015

It’s not a secret that California is facing a groundwater crisis.

But something else is: a vast repository of state records that scientists and water policy specialists say could dramatically improve our understanding of California’s groundwater resources if they were made public.

The records are called well completion reports, or well logs for short. For decades, the California Department of Water Resources has gathered the documents from well drillers and archived them in cardboard boxes in West Sacramento and other locations around the state.

In all other western states, such reports are public and often searchable online. But in California, they are considered confidential under a 64-year-old state law. Many think that should change.

Access to logs could help improve water quality and reveal which parts of California are being pumped the most, experts believe. Laurel Firestone, co-executive director of the Community Water Center, a Visalia-based nonprofit, called the secrecy a huge impediment to understanding the state’s groundwater system.

Opening the state’s well log vault is under consideration this spring at the state Capitol, where lawmakers, the governor and state officials are scrambling to find ways to help California cope with a four-year drought that is straining surface and groundwater supplies. Earlier this month, NASA senior water scientist Jay Famiglietti warned that “the state has only about one year of water supply left in its reservoirs, and our strategic backup supply, groundwater, is rapidly disappearing.”

“After four years of a continuous drought, it is about time we get this information … to better protect California’s precious groundwater,” said Pavley in a statement.

To a nonspecialist, well logs can appear as dry as the drought-parched California earth. To groundwater scientists, they are a treasure trove of information that can help chart the size, shape and thickness of aquifers and determine how water cycles through and between them. That, in turn, can help predict how much pumping aquifers can withstand without being depleted.

The state’s stockpile of well logs has grown to about 800,000 documents over the past six decades. Laid end to end, that is enough paper to circle Lake Tahoe twice.

While the public can’t view those records, the Legislature did create a loophole in 1951 allowing access “to government agencies for use in making studies,” making them accessible to some professionals but not others. The passage has been so narrowly interpreted by the Department of Water Resources that even scientists who work for public universities sometimes can’t gain access.

This is the third time since 2011 that Pavley – chair of the Senate Natural Resources and Water Committee – has sought to make well logs open to the public. Whether she will succeed this year is anyone’s guess. But it is certain the debate will be lively.

A glimpse of the coming drama can be gleaned from letters that have arrived in her office in recent weeks.

East Bay Municipal Utility District, which provides water to more than a million people, wrote to support the bill, saying data in well logs “is central to developing and implementing groundwater management plans.”

But in a state where groundwater is tied to private property rights and farmers pump with no restrictions, opposition remains strong in the agricultural community.

“We believe the well log data is available to those entities that have a genuine need to evaluate and utilize it,” wrote representatives of three agricultural organizations and the California Chamber of Commerce, in a letter opposing the Pavley bill.

“No beneficial purpose could be gained by making this confidential data available to the public,” they added. “We believe this measure will only assist those trolling for lawsuits.”

Several environmental and community action groups wrote in support. “As the physical effects of the drought worsen, from loss of water supplies to increased concentrations of groundwater contaminants, the need for reliable and transparent data … grows,” they said. “The information contained within well completion reports would allow communities to identify new well locations that might yield safe drinking water, a concern affecting thousands across the state.”

The governor’s view is already well known. “California is the only western state that does not provide ready access to well reports,” he wrote in a statement vetoing a 2011 well log access bill he felt was too restrictive. “That should be changed.”

California well drilling records to be made public

By Ian James, The Desert SunJune 28, 2015 California is about to dramatically increase the amount of information it makes public about the state's groundwater. Under new legislation signed by...

The Guardian recently published an op-ed by Laurel Firestone and UC Davis colleague Thomas Harter on the need for public wells logs in California, especially as drought conditions continue to...