California well drilling records to be made public 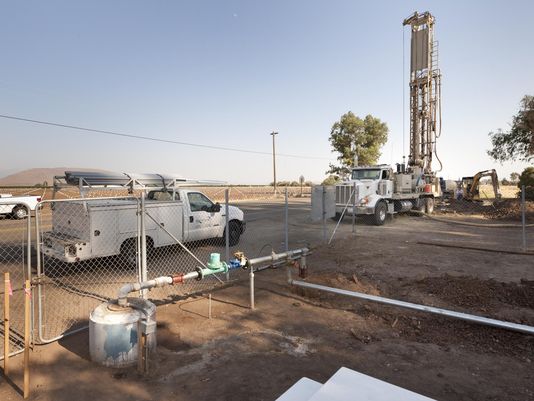 California is about to dramatically increase the amount of information it makes public about the state's groundwater.

Under new legislation signed by Gov. Jerry Brown last week, the state will begin making available well drilling reports that have been kept confidential for decades. That will open up a trove of information about the construction of approximately 800,000 wells for scientists and others who are seeking detailed data to better analyze California's drought-stressed water supplies.

"Now that we have this data and these tools, we can finally start managing our groundwater resources properly, and that's huge," said Deborah Ores, an attorney and legislative advocate in Sacramento for the Community Water Center, which focuses on areas of the Central Valley where wells have been going dry and people have been struggling for years with contaminated water supplies.

Until now, California had been the only western state that prohibited the release of reports submitted by well drillers. In other states, those well drilling logs have long been publicly available.

The secrecy began in California in 1951, just two years after the Legislature first required well drillers to start filing the reports. That change was adopted at least in part because some drillers at the time wanted the information not to be divulged, apparently because they didn't want competitors to have details about their operations.

The new measure requires that the records be made available to the public upon request. It was passed as part of Senate Bill 83, a trailer bill that Brown signed together with the state budget.

Since 2011, Sen. Fran Pavley (D-Agoura Hills) had repeatedly proposed bills aimed at opening up the well reports to the public.

Water scientists supported the change, saying that having more information about wells will help in efforts to manage California's groundwater.

"This is going to be an important step forward and a very essential data piece to help us manage the resource, both from a water quality and from a water quantity perspective," said Thomas Harter, a groundwater hydrologist at the University of California, Davis. "It'll be important for us to better understand the architecture of our aquifers."

California already makes public its data on groundwater levels measured in certain wells across the state. The well logs, which are kept by the state Department of Water Resources, provide other sorts of information that drillers must submit to the state each time they construct a well.

"It'll be much easier in the future to link water quality data to the actual depth from which water samples were collected," Harter said. "So we can actually map water quality in three dimensions rather than just in two dimensions."

He said having the additional data will also be useful as agencies develop long-term plans to manage aquifers under California's new Groundwater Sustainability Management Act, which Brown signed into law last year. That legislation lays out a statewide strategy for protecting groundwater, putting local agencies in charge while also giving the state new authority to step in when necessary to stabilize declining aquifers.

Ores said the information in the well logs will also be helpful in areas where communities are looking for new water sources and where portions of the groundwater are tainted with hazardous contaminants such as nitrates or arsenic.

"We can look at these well logs and look at where are there areas that are pumping safe water," Ores said. "And you can use that information to figure out where a new well can be drilled so a community can get that safe water."

Some farming groups and agricultural water districts in the Central Valley opposed opening up the well logs. They argued the change would infringe on private property rights, would lead to lawsuits and could give away the locations of well sites to metal thieves looking to steal pieces of water infrastructure. Harter said he thinks those fears are unjustified.

The state Department of Water Resources has said it plans to make public the locations of wells while redacting the names and personal addresses of well owners.

"The issue that will arise is when the well location and the owner's address are the same," Ores said. "But even if we could get approximate locations of where wells are, it is still extremely beneficial to understanding groundwater basins. Because if it's within a quarter mile or so, you're still going to understand what the basin looks like."

Groundwater well logs
Like us to spread the word

The Guardian recently published an op-ed by Laurel Firestone and UC Davis colleague Thomas Harter on the need for public wells logs in California, especially as drought conditions continue to...

By Tom Knudson, The Center for Investigative ReportingMarch 24, 2015 It’s not a secret that California is facing a groundwater crisis. But something else is: a vast repository of state...