Public meeting to be held on carncinogen found in Kern water 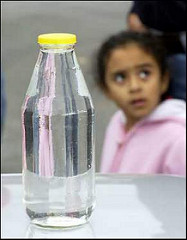 A local meeting is planned following a Cal Water report that states a colorless, odorless, cancer-causing chemical has been lurking in Kern's water systems for years.

State officials are taking action to set limits on just how much of it can be allowed in our groundwater.

It's called trichloropropane or 1,2,3 TCP.

It's classified as a safe pesticide by Central Valley farmers.

But in 2009, the Environmental Protection Agency established a limit after fi

nding it can cause cancer in humans.

The State Water Board says some public water systems are delivering water that is contaminated with levels that exceed the public health goal.

The poisonous compound TCP was manufactured in the 1980's by two companies, Shell Global and the Dow Chemical company.

It's been found in four counties Kern, Fresno, Tulare, Merced and Los Angeles.

About seven years ago, the EPA established a public health goal for the chemical of .7 parts per trillion.

The State Water Board is now proposing to lower that number to .5 parts per trillion.

Officials say long-term exposure or drinking can lead to cancer.

However, it does say people should not be concerned.

“At this point, it's our belief that water systems are ensuring that water that goes to their customers should be at levels lower that could have a health impact but they are asking us for specifics on what that safe line would be. That's why we are holding these public meetings and we are certainly encouraging public participation. But there is no immediate health risk,” said George Kostyrko with the State Water Board.

One of three workshops to inform the public about TCP will be held in Bakersfield.

It will include a staff presentation with information as well as the potential health concerns associated with it.

The meeting is next Tuesday, July 26 at the Kern County Public Health Department from 1 p.m. to 3:30 p.m. at the Mojave/Sierra room.

The State Water Board says it will use public input to establish its final maximum contaminant level recommendation.

Officials hope to have that number set by the end of the year.