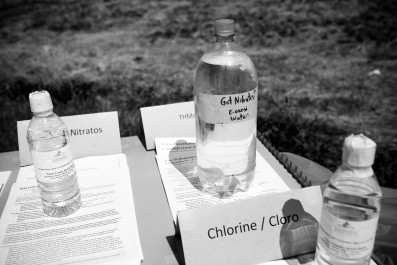 California’s San Joaquin Valley has the highest rates of drinking water contamination and the greatest number of public water systems with Maximum Contaminant Level (MCL) violations in the state. The most common contaminants found in the region’s water supply are nitrates, arsenic, coliform bacteria, pesticides, disinfectant byproducts, and uranium, and while these are found in water throughout the Valley, their effects are felt particularly hard by the 1.36 million Central Valley residents who live in communities that are 100% reliant on tainted groundwater (CA Water Boards, AB 2222 Report, 2013). These conditions are primarily the result of intensive agricultural and industrial activities such as the application of fertilizers and pesticides, large-scale animal feed operations, and mining. Some contaminants are also the result of naturally occurring processes in the groundwater.

The most prevalent groundwater contaminant found in the Valley is nitrate, an inorganic compound heavily produced for the agricultural industry for use in fertilizers. Nitrate at the high, health-endangering levels found in the Valley is generally known to be caused by 50 years of unchecked use of commercial fertilizers, unregulated and unprotected storage and disposal of animal wastes, and septic systems. Over time, high nitrate concentrations have traveled from shallow groundwater and are now encroaching upon deeper public supply wells, forcing communities to close or abandon their municipal supply wells and drill deeper, only to find arsenic-contaminated aquifers in many parts of the Valley. At the elevated levels found in the Central Valley, nitrate can cause death in infants less than 6 months old in a matter of days and the birth of stillborn babies. It has also been linked to thyroid illnesses, reproductive problems, and some cancers (UC Davis, Addressing Nitrate in CA’s Drinking Water, 2012).

Small, rural, disadvantaged communities and communities of color are disproportionately impacted by groundwater contamination. Residents in these communities often have wells that are shallower and more quickly and severely contaminated, and safe drinking water solutions tend to be expensive while the impacted communities tend to be very poor. In fact, recent studies have shown that communities with nitrate-contaminated groundwater pay on average three times the cost for water recommended by the US EPA (Pacific Institute, The Human Costs of Nitrate-Contaminated Drinking Water in the San Joaquin Valley, 2011). In addition, a study conducted by CWC Research Scientist Carolina Balazs found that community water systems serving larger percentages of Latinos and renters receive drinking water with higher nitrate levels (Balazs et al., Social Disparities in Nitrate-Contaminated Drinking Water in CA’s San Joaquin Valley, 2011). As of yet, water management plans, land use plans, and water quality basin plans have failed to developed programs that adequately protect local drinking water sources in small, unincorporated communities. To learn more about CWC’s work on groundwater protection, click here.

Because most drinking water contaminants do not have a distinct taste or smell, water quality testing is the only way to determine if they are present in the water. Furthermore, treatment options vary for each contaminant. To learn more about individual contaminants, please see below.

Arsenic occurs naturally in rocks and soil, but can also come from wood preservatives, fertilizers, pesticides, animal feeding operations, and mining. Historically, it was used in pesticides on cotton and orchards. Possible health effects include skin discoloration and rashes, reduced mental functioning in children, cancer of various types (including bladder, lung, kidney, and liver), and Type 2 Diabetes. The legal limit (MCL) is 10 parts per billion (ppb).

Chlorine is not generally considered a contaminant because it is often intentionally added to water as a disinfectant. However, unsafe exposure to chlorine can lead to negative health effects such as respiratory problems, skin rashes, and dizziness. People are most highly exposed to chlorine from inhaling, rather than drinking. This happens when water containing chlorine is heated to the point where the chlorine becomes a gas and is inhaled. The legal limit (MCL) is 4 mg/L.

DBCP (dibromochloropropane) is a banned pesticide that was used on grapes and tomatoes, but continues to persist in groundwater to this day. Possible health effects include kidney and liver damage, damage to the male reproductive organs and fertility, and cancer. The legal limit (MCL) is 0.2 ppb.

Nitrates come from the use of fertilizers containing nitrogen and from animal and human waste, either from dairies or septic tanks and sewer systems. Possible health effects include Baby Blue Syndrome, birth defects, and pregnancy complications. The legal limit (MCL) in California is 45 mg/L as nitrate and elsewhere in the United States is 10 mg/L as nitrogen.

Disinfectant byproducts, specifically THMs (trihalomethanes), occur most often in surface water when chlorine is used to disinfect the water and then reacts with organic matter. Possible health effects include liver, kidney, and thyroid damage, increased risks of bladder and colon cancer, and increased risk of pregnancy complications. The legal limit (MCL) is 80 ppb.

Uranium often occurs naturally in some rocks and soil and is weakly radioactive. It can also come from the use of fertilizers with phosphate or mining and industrial processing activities. Possible health effects include nausea, liver and kidney damage, and bone or liver cancer.

Most 1,2,3-TCP contamination stems from the extensive application of soil fumigants manufactured by Shell Oil and
Dow Chemical Company containing the unnecessary impurity 1,2,3-TCP prior to the 1980s. Possible health effects include cancer, kidney and liver damage, headache, dizziness, irritation of the skin, nose, eyes, and/or throat. CWC was instrumental in the creation of a health-protective legal limit for the carcinogen!