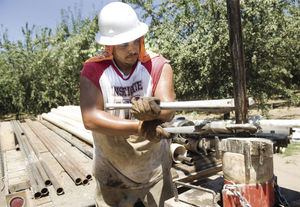 Some feel it will not go far enough

Tulare County District 1 Supervisor Allen Ishida knows the importance of water and farming, but he also knows the situation the county has found itself in with dropping well levels.

Ishida, who also chairs the county’s Water Commission, said an ordinance to place some restrictions on well drilling is being drafted and could come before the county board of supervisors by the end of August.

That is not soon enough for Kristin Dobbin with the Community Water Center who feels with more domestic water wells failing every day, time is of the essence. Also, Dobbin feels the draft ordinance she has seen does not go far enough to curb the pumping of the underground water supply.

Dobbin addressed the supervisors at their meeting Tuesday, saying she was concerned with the delay in getting the ordinance before the board and debated.

“We know the underground water draft is a crisis,” she told supervisors after saying another 81 wells have failed in the county in just the past couple of weeks.

Tulare County has been the epicenter of the water crisis in California, with more than 1,500 well failures in the past two years. While many of those have been fixed, there are still hundreds of wells dry, especially in East Porterville.
Dobbin feels an ordinance restricting new wells is needed, but is disappointed the county may not take that aggressive of an approach.

“We would like protections to be as meaningful as possible,” she told The Recorder Tuesday.
Ishida said what will go before the board are two recommendations. The first is to ban any well drilling on ag land which has not been farmed in at least 10 years. Another recommendation is for the county to hire a hydrologist to establish a buffer zone between wells — domestic and ag — so one well does not impact another.

The ordinance has been debated for months and according to Dobbin, the first recommendation of a joint meeting of the Water Commission and the Agricultural Policy Advisory Committee was for the county to develop an ordinance similar to one passed in Stanislaus County, which she said is more restrictive in permitting new wells. She would like the county to consider a similar ordinance.

That Stanislaus ordinance, she explained, requires a process where a new well request has to be evaluated as to its impact on the groundwater supply, before it can be approved. Exempt are wells which produce less than 2 acre feet of water a year, but the evaluation would apply to almost all ag wells. Dobbin said the burden of providing that study would be on the applicant.

“We would like to see sustainability,” she said, adding they feel the county is getting farther away from reducing the dependence on groundwater.

The drought and a lack of surface water for irrigation has forced farmers to depend more and more on pumping water from the underground to keep their crops alive. Thousands of acres of ag land were not farmed in the past two years because of a lack of water deliveries from the Friant water system. Farmers got no surface water in 2014 and 2015. Growers are getting water from the Friant-Kern Canal this summer.

Another recommendation, said Ishida, and this came from the Ag Committee, is to do nothing and wait for the Sustainable Groundwater Act (SGMA) to go into effect, but Ishida said that may not be until 2019 or 2020. SGMA will limit how much water can be pumped from the underground and current figures are limiting the pumping to a half of an acre foot of water per acre, per year. That is far too little to grow a crop or keep and orchard alive.

The county, as are most counties in the state, are coming up with their water basins and plans how to implement SGMA which has a deadline of 2020 to have plans in place.

He said the state is telling the county it must do something now to reduce the pumping of the underground water supply which has been dropping for years.

“They want us to take action,” he said. “The state has told us they expect us to do something about the depletion of the groundwater,” he added.

Ishida explained what they are considering will not have much of an impact. It will mostly impact foothill areas used as rangeland where a grower may now want to put in a deep well and plant an orchard.

The supervisor said the ordinance will have a very minimal impact on the groundwater supply.

Dobbin said the county has an opportunity to pass a stronger ordinance which may restrict new wells, especially ag wells, and reduce the amount of pumping of groundwater. She said a stricter ordinance could help those residents whose wells are dry.
Ishida said the matter will come before the board Aug. 23 or 30 for direction. Then hearings will be held and the earliest the ordinance would take effect is around the first of the year.

ordinance overdraft Groundwater
Like us to spread the word

By Ryan Sabalow, Dale Kasler and Phillip Reese September 25, 2015 Original article: http://www.sacbee.com/news/state/california/water-and-drought/article103987631.html Drive through rural Tulare County and you’ll hear it soon enough, a roar from one of the...

With over 1,500 homes that have run completely out of water since 2014, Tulare County is at the epicenter of the drought. This month, CWC and are allies are doing...

By Ryan Sabalow, Dale Kasler and Phillip Reese September 25, 2015 Original article: http://www.sacbee.com/news/state/california/water-and-drought/article103987631.html Drive through rural Tulare County and you’ll hear it soon enough, a roar from one of the...