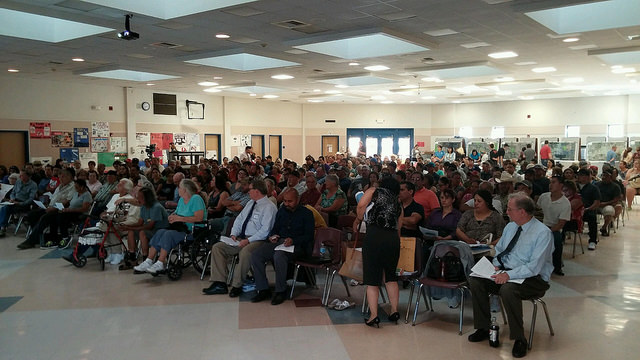 East Porterville residents at the community meeting on June 23rd.

Close to 300 community residents attended an all-stakeholder meeting held on June 23rd on the proposed long-term solution in East Porterville. The long-term solution includes hooking up East Porterville households to the City of Porterville's water system. Community members are supportive of the city running the water system, but still have reservations around mandatory well abandonment, future annexation and future water-rate increases.

After over two years since the first wells started running dry, this meeting was a big step toward securing a lasting, community-wide drinking water solution for East Porterville. CWC is working closely with all stakeholders to ensure that community members are involved in the decision-making for their water future. To ensure that residents have a voice in the development of a long-term water solution, CWC worked with residents earlier this year to help form a local community-based organization called East Porterville for Water Justice. East Porterville for Water Justice has held monthly community meetings since March attended by local and state agency staff, including the State Water Resources Control Board and the Department of Water Resources, which are the two state agencies working on the community-wide solution.

A Draft Feasibility Study for this project is out for public comment now, which is what residents were able to learn about and comment on at the June 23rd meeting. If all goes well, many East Porterville residents will be connected to a sustainable source of water by the end of the year. We're working closely with East Porterville for Water Justice to ensure that the residents who will ultimately be drinking that water have a seat at the decision-making table.

Drought East Porterville
Like us to spread the word