For Some People in the U.S., Every Day is a Day without Water

Water is something that we easily take for granted. We wake up in the morning, stumble into the shower, brush our teeth, and brew our coffee without a second thought of how the abundance of clean water arrived at our tap. By the end of that routine, nearly 30 gallons of water has been used. Yet, as of 2015 more than 660 million people throughout the world still did not have access to clean water, spending large portions of the day walking miles to fetch water. 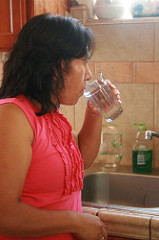 Most people within the United States do not often consider what life would be like without water for a day, let alone for most of the time.  Imagine a Day without Water, September 15, 2016, is a day to help raise awareness and educate the American population on water, our most precious resource and one that is facing serious constraints.  This campaign is sponsored by Pisces Foundation’s grantee, US Water Alliance, and is implemented by the Value of Water Coalition. Raising awareness is possible in many ways, such as issuing a press release, sharing success stories, or participating on social media with the hashtag #valuewater. A full list of ways to participate can be found here.

It is easy to assume that most water related concerns are in other countries.  But that is not always true. Within California, according to Community Water Center(CWC), a well-respected grassroots organization working to address water and equity issues in California’s Central Valley, thousands of people in the San Joaquin River Basin in the southern Central Valley have no clean drinking water due to drought or contamination of ground water supplies with arsenic, nitrates, or pesticides. In 2014, within the San Joaquin Basin, 432 public water systems did not consistently meet safe drinking standards. These poor water conditions have been exacerbated by the five-year drought-year drought that California currently faces. Many domestic wells that are the primary source of water for poor, disadvantaged communities have gone dry. Water levels at more than 2,300 wells state-wide have been deemed critically low or dry.

At the Pisces Foundation, we are working to highlight and address drinking water quality issues throughout the US, including through an important meeting this week we helped design and co-funded where the focus is on how remote sensing technology can help. At a national level, we’re supporting efforts like NRDC’srecent report examining the scope of lead in drinking water.  To address the complexity of the problems in parts of California, our grantee, the Water Foundation, is working with the Community Water Center and other partners to advance statewide and local solutions in the San Joaquin Valley to build resiliency for vulnerable communities and support all human needs. CWC is helping create new water sources, such as hooking up homes to community water systems, building wells, and helping to ensure that broken and contaminated water distribution systems are repaired.

I had the good fortune to visit the San Joaquin Valley with Laurel Firestone of the Community Water Center several years ago. We toured through the Valley in a van, meeting up with local residents at schools, which is where most people have to go to pick up water for their homes and families.  Turnout was high throughout our tour as residents came out to explain their many years of efforts to obtain access to the safe tap water that the rest of us take for granted.  It left a deep impression on me.

Rebecca Quintana and her family are among those the Community Water Center is assisting. The Quintana family did not have normal, reliable deliveries of clean drinking when CWC helped install a new well for them in the fall of 2014. The Quintana family, like other residents of Seville, CA, had access only to ground water contaminated with nitrate at levels that were much higher than federal health standards deem safe.  But for the Quintanas and others, a new well is not the complete solution. The entire water distribution system must be replaced and be connected to an outside water source to ensure safe water for the residents of Seville.

The Pisces Foundation is proud to partner with the Water Foundation and the Community Water Center, and many other grantees committed to clean and safe drinking water.  Together, our goal is to make a day without water an imaginary world.  No one should have to live even one day without clean water.

Nitrates Drought Groundwater
Like us to spread the word