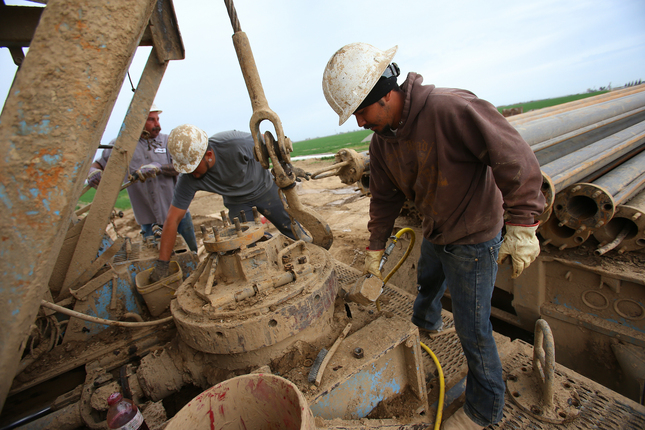 In what would be the most significant water law passed in California in nearly 50 years, lawmakers in Sacramento are working with Gov. Jerry Brown on a landmark measure to regulate groundwater pumping for the first time.

With an Aug. 31 deadline until the end of the session and billions of dollars at stake, negotiations among farmers, environmentalists, cities and elected officials are reaching a crescendo.

Although landowners who want to divert water from reservoirs and rivers have been required to get a permit from the state since 1914, farmers and cities who tap underground aquifers -- California's largest water source -- can pump as much as they want, when they want and with almost no oversight or limits.

As a result, decades of intense pumping have dropped water tables dangerously low in places such as the San Joaquin Valley and Paso Robles. Scientific studies show the ground is sinking in many hard-hit areas and that aquifers are at risk of running dry.

"It's like a shared bank account. But nobody ever has to balance the checkbook," said Lester Snow, former director of the state Department of Water Resources. "We have based a large part of our economy on deficit spending of groundwater. It has to come to an end."

California uses more groundwater than any state, relying on it for 40 percent of its total water supply in most years and 60 percent in dry years. Yet it is only state in the West without rules to ensure it doesn't run out.

Snow and other reformers are supporting a bill by state Sen. Fran Pavley, D-Agoura Hills, that would require local government officials, probably counties in most cases, to bring their groundwater basins up to sustainable levels.

If the bill passes, the local agencies would be required to regularly measure water tables and set numerical goals so that only as much water is taken out as is naturally replenished.

Each county could use a wide variety of tools, including setting up programs to recharge aquifers by putting more water in the ground, and requiring farmers -- some of whom don't have meters on their wells -- to carefully measure and report how much they pump, and maybe pump less.

If local governments didn't set up oversight systems or failed to show progress, state officials could step in and write and enforce the local rules.

"Groundwater is a critical source of water for families, farms and businesses across the state," Pavley said. "And if we want it to be available in the future it needs to be managed sustainably."

The governor has made Pavley's legislation a top priority. But her bill, SB1168, is drawing opposition from the state's main farm organization.

"At some point in time there has to be some accountability, and we have to get a handle on how much we are pumping," said Paul Wenger, president of the California Farm Bureau Federation.

Wenger, a third-generation farmer who grows almonds and walnuts on 450 acres on the outskirts of Modesto, said he's worried that the bill is so broadly written that it would allow state regulators to come in and limit the amount of water farmers can pump from wells.

In dry times like the current three-year drought, when rain and snow aren't available and reservoir levels are low, groundwater is vital, he said. One well on his farm is keeping his orchards alive during the drought, Wenger said.

"We're doing everything we can. We're stretching out our water -- we are just getting by," he said. "But if we didn't have access to groundwater, our trees would drop their leaves and slowly die."

Wenger says the Legislature should delay the law until next year for more study.

"We are talking about one of the most critical bills this Legislature will have seen for many years and we've got a month to work through it?" he said. "We feel like we're getting rolled here."

But supporters, including the powerful Association of California Water Agencies, which represents 440 water districts in the state, say action is already long overdue.

The Central Valley -- from Redding to Bakersfield -- is consuming twice as much groundwater as nature is returning through rain and snow, studies from the University of California and the U.S. Geological Survey have found.

Overall, California pumps out about 2 million acre-feet a year more than is replenished, according to state estimates. That's enough water for 10 million people a year. The cumulative overdraft over the past 70 years is enough to fill Lake Tahoe, Snow said.

Both sides agree that Pavley's bill would be the most significant new water law in California since 1969, when then-Gov. Ronald Reagan signed the Porter-Cologne Act, which gave the government broad powers to crack down on water pollution. That legislation became a model for the federal Clean Water Act.

As negotiations continue, across the Central Valley well drillers are working seven days a week. Farmers are spending hundreds of thousands of dollars to drill ever-deeper wells. Like an arms race, one deep well can draw water away from other shallow wells, eventually causing them to go dry.

"It's not only burning your furniture for firewood, it's burning your neighbor's furniture as well," said Jennifer Clary, a program manager with the environmental group Clean Water Action.

"There is always a property rights issue, but if you overpump your property you are overpumping from your neighbor's property, too."

One model is Santa Clara County.

Since 1964, Santa Clara County has had a "pump tax" in place to charge a fee on well owners. Because of farming and population growth, the water table fell 175 feet from 1915 to 1965. Since then, after years of the Santa Clara Valley Water District putting water back underground in wet years, the water table has returned to where it was a century ago. Pavley's bill would allow, if not encourage, other local governments to charge similar fees to fund groundwater programs.

The measure would affect 127 groundwater basins identified as "high" or "medium" priority by the State Department of Water Resources. Those basins, located in Southern California, the Central Valley and parts of the Bay Area, are ranked by the number of people whose drinking water they supply, the number of acres they irrigate and their overall conditions. Local governments would have until 2020 to write plans and then 2040 to bring their basins back to health.

Environmental groups support the reforms, which are mirrored in an Assembly bill, but worry they will be weakened in backroom dealing this month. In particular, they are concerned that the bill doesn't require that well logs, which show the location and other details of wells, be made public, even though other states, such as Texas, require that. They also worry that local agencies will be given too long to impose rules that actually limit pumping in areas where water tables are collapsing.

"If the locals could manage groundwater without help," Clary said, "then we wouldn't need the bill."