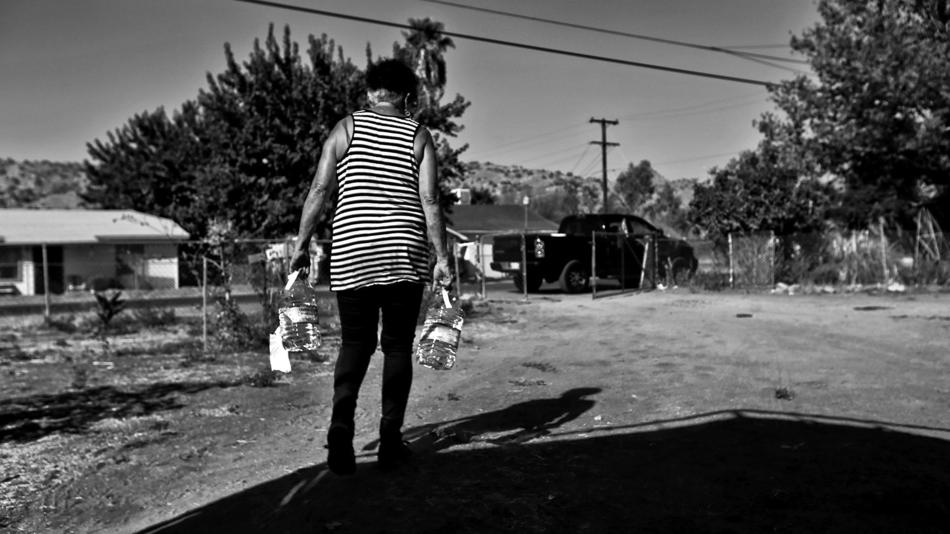 The grandmother sat outside in her Sunday best next to a house with peeling paint, her canned iced tea resting on top of a washing machine that didn't work. She'd been without running water for four months.

Up an easy-to-miss dirt road, a 70-year-old woman moved 5-gallon jugs of water into her single- wide trailer. It was hard because she was weak from chemotherapy. Her water had stopped coming out of the tap three months ago.

At the elementary school, a kitchen worker talked about all the children who were coming to school dirty.

This scattered Tulare County community may be the hardest-hit place in California's punishing drought. Of its 7,300 people, almost 1,000 have no running water.

But few knew that until Donna Johnson, 72, started counting.

During a week when the temperature reached 106, Johnson drove her purple PT Cruiser past "Beware of dog" signs and up side roads that looked long-deserted. She found mobile homes hidden behind other buildings. She said to her newfound neighbors, "Hi. Do you have water?"

Again and again, the answer was no.

When Johnson's well ran dry in June, she and her husband, Howard, had no idea they were part of something bigger.

"I'd heard 'California drought!' on the news," she said. "But I guess I was just oblivious to how bad it had gotten."

At the local gas station where everyone stops for a cold soda, Johnson tuned in to the conversations.

It was all, 'So-and-so's well ran dry,'" she said.
No public agency was keeping track. Until this week, California was the only Western state that didn't regulate groundwater, including an estimated 600,000 private, domestic wells mostly in more rural regions such as the Central Valley. Groundwater levels here have plunged by 60 feet or more in some spots, and tens of thousands of wells are in danger.

In July, Johnson decided to put together a list of people out of water in East Porterville. She figured that while she was at it, she should bring them water.

The Porterville Recorder ran an article that gave her phone number and address and said she was collecting bottled water for drought victims. The next day there were pallets of plastic bottles under her tarp carport.

Johnson deputized Matt Rogers, a 19-year-old former neighbor, as her right-hand man to make the deliveries. The calls from people needing water came as quickly as the donated bottles.

"Families would call at midnight and say, 'We're completely out of water,' and we'd go take them some," Rogers said. "I'd tell them it was a lot of work for a 72-year-old woman, but Donna got mad and told me to stop telling people her age."

Still, the growing numbers and nonstop deliveries were taking a toll.

"I'd come home at night and cry," Johnson said. "I thought 'What are these people supposed to do?' They could be dying for lack of water and just get brushed under the carpet."

For months, scores of people had called the county, the next-door city of Porterville and the local water district to report dry wells. The answer was always the same: This agency isn't responsible for wells on private property.

But officials hadn't realized how many people were desperate.

In front of an East Porterville fire station, a storage tank was filled with water from a city hydrant that residents could use for bathing and flushing toilets. Signs warned in English and Spanish: "Do not use this water for drinking."

Nonprofit agencies began coordinating donations, grants and deliveries. Johnson was no longer a solo force. But she didn't stop her daily water runs.

"They're working their bejesus off at County Emergency Services," Johnson said. "But you've got to understand a place like East Porterville. Not everyone is going to fill out paperwork, and some people are hard to find."

On a day when the heat was pressing down like a waffle iron, Johnson and Rogers loaded up shrink-wrapped cases of bottled water.

Johnson pulled her lace-trimmed cowboy hat low. Her sunglasses had zebra stripes and rhinestones. She had elephants on her shirt and an elephant hanging from her rear-view mirror.

"Elephants this week. Next week it might be angels or horses," she said.

She used to be fickle about men too, until she married Howard, a physical therapist who prefers to stay in the background. They share a love of horses and 20 years ago bought a place with a corral in East Porterville, outside city limits.

"Did you guys even know that they say if you live on the east side, you're nothing?" Rogers asked her.

On a lawn as pale and scratchy as a hay bale, 9-year-old Destiny Carrillo attempted a cartwheel while her grandfather, Raul Carrillo, a house painter, watched.

"Hi, do you have water?" Johnson asked, pulling into their driveway. "A little," he said. "But if two people take a shower, it's done."

Eight people lived in the tidy home. Destiny's mother, Veronica Carrillo, stepped out on a porch decorated with a small pot of geraniums.

"Thank you for the water. We didn't know where to go. We're grateful," she said, smoothing her daughter's hair.

On the next block, Manuel Dominguez, 84, didn't answer his door right away.
"Is he OK? He's old. He's always at home," Johnson said, adding another "Yoo-hoo!"

Dominguez came around the corner from the backyard, where he had been working on the pump of his well.

"He still doesn't want to believe that the ground is out of water," said his girlfriend, Gloria Acosta,

65, coming up the driveway with a stack of bottled water.

She used to bring 3 gallons of drinking water a day from her home in Porterville, but her landlord found out and put a stop to it. He was afraid it would run up his water bill. Now she has bought three cases of 24 bottles of water on sale for $7.98.

"Plus $2.38 CRV," she said. You keep track of stuff like that when you live on Social Security and baby-sitting money. Johnson added another 24-pack of water.

Dominguez's daughter Angie Nunagray came through the door with a 5-gallon jug of water for washing dishes. She cleans her father's house every day, being sure not to disturb his stacks of books, the loaded rifles propped in the corner or his collection of scissors covering one wall — because a man can never have too many scissors.

"I vacuum and dust, but you can't get it really clean without water," she said.
Dominguez pulled out a splintered guitar and sang Mexican waltzes. Acosta rolled her eyes. "She thinks I'm loco, but she loves me," he said.

Down a dirt road, a schoolgirl carrying a flute case unchained a dog and they went for a walk, kicking up dust. A man washed his hands in a bucket of water. Places lucky enough to have a small pool of underground water had green lawns.

Marcella Ramirez, 70, had heard Johnson's car coming and was waiting with an ancient dolly outside her trailer. Wire flowers sprouted from the top of a chain-link fence. An American flag windsock drifted from a sagging carport. A miniature wishing well — it was dry — sat on bare dirt.

"Matt can carry it in," Johnson told her.

Ramirez agreed, but emphasized that she was strong enough to wheel the water in herself if she had to. She said she was a lucky woman. The last year was tough — her brother died, she fought cancer and the well ran dry in June. But she feels healthy now, her hair grew back, and look at her nice SUV.

"I didn't go to school or nothing and I got a car and a driver's license," she said. "I made a good deal and I can't even read or write."

"Marcella, do you have those forms from the county for water deliveries? Do you need help filling them out?"

On the hood of Ramirez's car they puzzled over which boxes to check.

"Are you multiethnicity?" Johnson asked.

"Multi what?" Ramirez said. "I don't know what that means."

Back on the road, Johnson talked about the last time she'd seen rain.

"It was months ago. I was where I used to have lavender and so many flowers. I watched it dry up before it hit the ground."

On the main road through town, a mother gave her 6-year-old daughter a bath — in her clothes, in a blue plastic drum of nonpotable water. The girl giggled and ducked her head underwater to get out the shampoo.

Nearby, a tree swing swayed in a stir of hot air. Stairs led to the place where a trailer had once been, until a well ran dry and another family moved away to search for water.

(Photo: Donna Johnson lugs bottled water for some of the hundreds around East Porterville whose wells have gone dry. She realized others might need help after her own well went dry in June. Credit: Michael Robinson Chavez, Los Angeles Times)