Hundreds of Millions in Drought Relief Failing to Reach Many Californians

The next time you bring home a case of those little 16-ounce bottles of water, imagine living out of them: pouring a little out every time you wash a dish and dumping them into buckets to shower or flush the toilet.

That’s what Maria Medina’s family has done since their well went dry 18 months ago.

“I use just a little bit of water,” Medina explains in Spanish as she trickles water over a dirty plate. “It takes about half of one of these bottles to wash a single dish. I have to use enough water to get the soap off.”

Medina, her husband and two children live in Okieville, a cluster of ramshackle houses and trailer homes in rural Tulare County. Originally settled by Dust Bowl migrants, the unincorporated community is now home to mostly Mexican farmworkers and their families. Because of the drought, many of them have seen their wells slow to a trickle — or go completely dry.

“A year and a half and no water. It’s really hard,” sighs Medina. “Okieville used to be such a pretty place. I had grass. Now I just have a poor dog chained up to a dead tree. The situation just feels so impossible.” Maria Medina, right, and her 20-year-old daughter, Guadalupe, outside their Okieville house, where they haven’t had running water for 18 months. (Kerry Klein/KQED)

She and her 18-year-old son, Ricardo, fan themselves in their sweltering kitchen.

“I’m telling you,” his mother jokes. “Sometimes the only way we get a bath is from our own sweat.”

Over the last year and a half, Gov. Jerry Brown has set aside $587 million for immediate emergency drought relief. But a third of that money still hasn’t been spent. And the Medinas have yet to see any of it.

“Where is it?” Medina asks, throwing her hands up in the air. “We’re here. And there isn’t any help.”

Part of the problem is that some families, like the Medinas, haven’t reported their dry wells to the county because they don’t know that help is available.

At a recent open house for a new drought assistance center in nearby Porterville, county officials and nonprofits tried to get the word out.

“If your well goes dry, you want to sign up immediately for the bottled drinking water program,” advised Tulare County’s Melissa Withnell, “because you want to make sure you have water to drink.”

Withnell says Tulare County is delivering bottles of water to about 1,200 homes where wells have gone dry. Another program installs tanks of water at homes so people can shower and flush toilets. But the Medinas, who don’t own their home, don’t qualify for a tank because, so far, state funds can’t be used to pay for upgrades to rental properties.

“As far as falling through the cracks, the people that might be are renters who live in homes that are without water,” explains Withnell. “Unfortunately, the county’s not in a position where we can do any type of enforcement toward landlords.”

There’s a waiting list for homeowners, too. So far, the county has installed more than 360 tanks, although wells for more than 1,700 homes have gone dry. And yet Tulare County’s program is the most aggressive in the region. Nearby Fresno County has installed just eight household water tanks. The state estimates close to 150 homes in the county are without water, but there could be more.

“We don’t have any way of keeping track of all the wells that have gone dry,” says Wayne Fox, with the Fresno County Health Department. Alvaro Alvarez and his family had been out of water for almost 18 months before a county-sponsored nonprofit installed a water tank at their Porterville home last month. Neighbors shared water with them for months until their well ran dry, too. (Kerry Klein/KQED)

To estimate the number of dry wells in the county, says Fox, they rely on state data combined with a list of county residents who’ve applied for permits to drill new wells on their property. But only homeowners who can potentially foot the bill for a new well — typically thousands of dollars — will be on that list.

Many counties don’t collect data on private wells serving individual homes. Yet it’s the counties that have to work out the best ways to provide relief, says Eric Lamaroux with the state Office of Emergency Services. His agency is coordinating drought relief with individual counties — the state estimates that some 12,000 household wells have gone dry in the drought.

“We’ve never dealt with a drought response of this magnitude in California,” he explains.

So far, the state has distributed nearly 900,000 food boxes to food banks in drought-stricken communities and has distributed over $400,000 to help low-income families pay their water bills. That’s an unprecedented level of assistance, according to Lamaroux, who acknowledges that water tank programs were slow to ramp up. Local agencies had to figure out how to build and install them, and the state had to find the water to fill them.

“This tank program was something we had never done in the history of California,” he says, “so understanding what the logistical challenges were going to be on the front end was very difficult.”

But Omar Carillo, an advocate with the nonprofit Community Water Center, headquartered in Tulare County, says the state hasn’t worked fast enough for families like the Medinas.

“That is not an appropriate response,” he says. “If you have an individual home and they haven’t had water for 18 months, that is a big problem. That is a huge problem.” 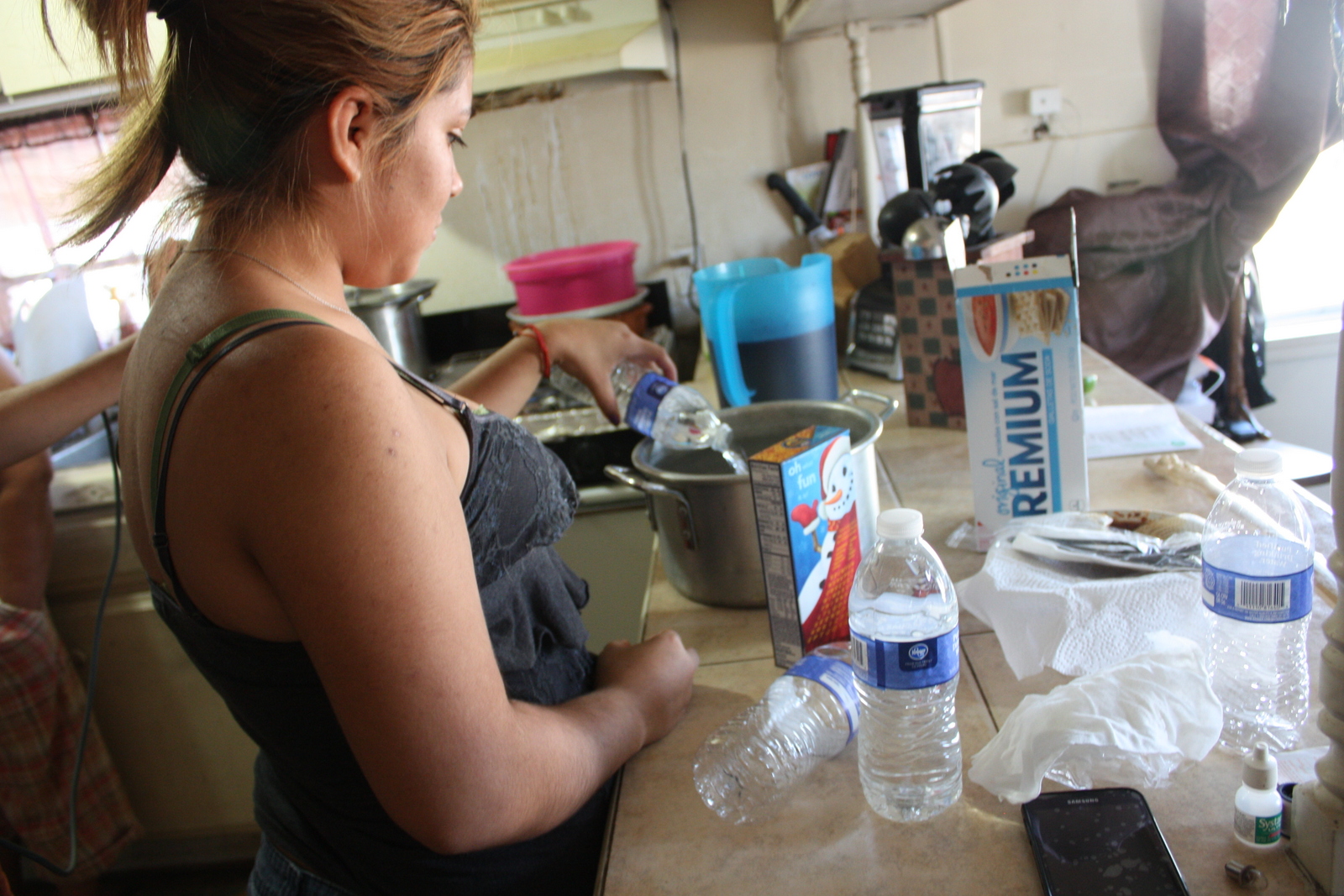 Medina’s daughter, Guadalupe, prepares for dinner, pouring bottles of water into a pot to make macaroni and cheese.(Kerry Klein/KQED)

He blames the state’s alphabet soup of agencies working to address the drought with different pockets of money, and questions whether the state’s emergency services office, which traditionally handles wildfires and earthquakes, is the most qualified agency to coordinate the efforts.

“The Office of Emergency Services is more set up to address maybe more short-term needs,” he says, “but ultimately what we’re looking at here is a multiyear drought.”

Funds are earmarked for a range of emergency relief efforts, from drinking water to public showers to food boxes for farmworkers. State officials acknowledge the slow pace of spending, but point out that the vast majority of the nearly $4 billion in total drought funding is meant for longer-term construction projects, such as connecting homes to existing city water systems.

In the meantime, Maria Medina says she will stay in her house without water because she has no choice. The drought has cost her husband his longtime job in the cotton fields.

“We’ve looked,” Medina says. “We can’t move because another house is more expensive. And we can’t pay more; there’s no work.”

“Pretty much I used to cut every yard out here; now, no water, no yard,” he shrugs. “I’m going down.”

The state has allocated about $6 million to help families relocate. But so far, none of that money has made its way to people like the Medinas.

Meanwhile, a Bay Area nonprofit has launched a new online fundraising effort. Through the Drought Relief Fund, individual Californians can donate to help fill in the gaps for families that have had no help from the state or county government.