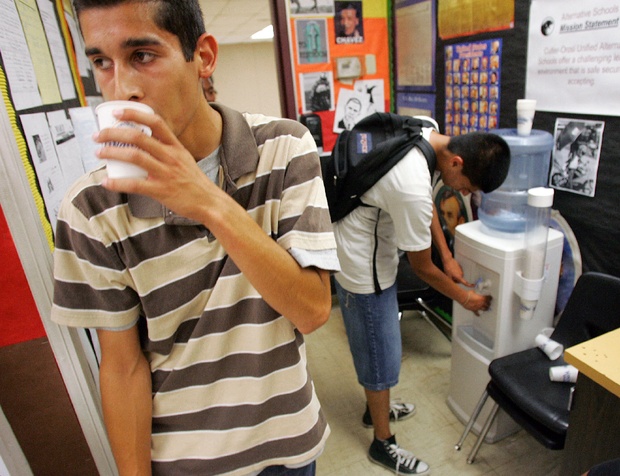 Latino Americans suffer from disproportionately high rates of obesity—especially children, who are 51 percent more likely to be obese than their white counterparts. Unhealthy advertising from food companies, a lack of access to safe and adequate recreational areas, and poor snack and beverage options at schools have all been cited as major contributors to this early-life epidemic.

But there may be another, overlooked factor in the mix: A recent policy brief from U.C. Davis' Center for Poverty Research shows how negative beliefs about the safety and quality of tap water, especially among Latinos, is linked to higher consumption of sugary beverages—key culprits in obesity.

"In some areas, people are getting their water from private wells," says Kaiser. "Those aren't as regulated."
The brief comes from a study, led by Dr. Lucia Kaiser, of water contaminants and consumption habits in two low-income rural towns in California's Central Valley. These are towns largely inhabited by immigrant agricultural workers. Parts of the valley have the highest rates of drinking water contamination, and the most public water systems with contaminant violations in the state. Despite its agricultural wealth, the valley also comprises some of the most impoverished regions in the nation.

"In some of these areas, people are getting their water from private wells," says Kaiser. "Those aren't as regulated, or as tested to be proven safe." There were 13 water systems used by people in the study—two state-regulated and 11 smaller public and private systems, including those wells. Kaiser's team found that every single one had contaminant-level violations at some point over the last 12 years, including traces of bacteria, arsenic, and disinfection byproducts.

While contaminant levels in the two large public wells have decreased, the perceptual damage has been done. Kaiser's team interviewed 27 mothers living in the community about their family's water consumption habits. They all reported that they avoid drinking tap water because of its bad taste, dirty appearance, or "general contamination"—comments that are, according to the brief, "consistent with high mineral content in samples from the largest water system serving this community." These minerals—manganese and iron—aren't considered dangerous by the EPA, but research from the World Health Organization suggests high levels of manganese might have neurotoxic affects.

Moreover, whether or not the water is currently safe to drink by city standards, this legacy of poor quality has conditioned community members to eye their taps with suspicion. "It’s hard to regain trust when people have had that kind of experience," says Kaiser. "Keep in mind, too, that these are farm-worker families. They’re working out in the fields in a very hot climate with protective clothing. They're sweating a lot. The need to drink water is very real."

So families drink water—but in bottles, or from a filtration system. These are extra cost burdens for families already living in poverty. Or they might choose sugary beverages. Among the families interviewed in the brief, "at least 38.5 percent of children aged 3-8 years drank [sugary beverages] more than 2-3 times per week. These children may drink [them] so frequently in part because of a real or perceived lack of safe drinking water."

Ivan Garcia, who collected and entered data for the study, is a 30-year-plus resident of the Central Valley's tiny city of Firebaugh. There, "I cannot remember ever being offered a glass of tap water," he says. And he still doesn't drink it himself. "Being that I grew up in a home with a filter system, I just assumed that tap water was unhealthy. In Firebaugh, there is a major food processing plant whose waste some residents say contaminates our water in town. Whether or not this is true, I'd rather be safe than sorry."

"There is a major food processing plant whose waste some residents say contaminates our water. Whether or not this is true, I'd rather be safe than sorry."
It's time for policymakers not only to police and remove contaminants that may still exist, say the researchers, but also to rethink water-quality messaging. Long-suspicious residents have to know that water is safe to drink in order to drink it. "Better communication would certainly help," says Kaiser. "You can develop written materials in the right language, and at the right literacy level, and get on the radio." She says subsidies for household filtration systems could also benefit families who rely on expensive bottled water or obesity-linked sugary beverages.

Dr. Anisha Patel, an Assistant Professor of Pediatrics at UCSF who researches clean-water access in public schools, says the brief is right on track. "Due to real contaminants or the fact that that many of these families are integrating from countries where the water was not safe, there is this negative perception among Latinos," she says, adding that African-American families also show similar habits.

Patel notes that the Davis brief dovetails with a forthcoming joint report from the Community Water Center and the Environmental Justice Coalition for Water on the state's biggest public and private violators of contaminant levels, with a special look at public schools.

"From 2005 to 2011, over 14.3 percent of public schools in California were associated with at least one violation," says Shen Huang, Technical Analyst at the Community Water Center, of the report. "Schools in high-poverty areas, including the Central Valley in particular, had recurring violations, from arsenic, bacterial contaminants, nitrates, and disinfection byproducts."

Huang says the plan is for the report's release to coincide with the January 29 launch of Agua4All, a pilot project funded by the California Endowment. 120 water-bottle-filling taps will be installed in some of the state's most rural communities, including parts of the Central Valley. It's not enough, of course: Schools and households need more directed assistance. But taps are a small step towards health, safety, and a basic human right for some of the nation's poorest.

Last year's Agua4All Launch event We hope you'll join us for the #Agua4All Community Rally and Celebration in South Kern on Tuesday, April 5, from 5-7pm in Arvin at El Camino Real Elementary...

Residents of Arvin, CA, have been impacted by arsenic-contaminated water for over a decade. Each of the community's five wells exceeds drinking water standards set by the federal EPA for...

By Haya El Nasser, Al Jazeera America April 6, 2015 ARVIN, California – Californians who grumble about not being able to water their lawns everyday during the fourth year of a...