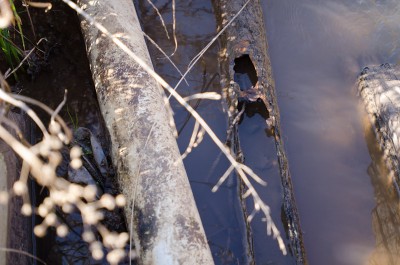 Inadequate and Dilapidated Infrastructure
Many communities in the valley lack centralized water system infrastructure, relying instead on individual, privately-owned wells. Individual private wells are generally more susceptible to contamination because they are often shallower than municipal wells, and in many cases are not sealed or constructed sufficiently to protect from pollutants.

Even in communities that have a centralized water system, many communities’ pipes are old, dilapidated, or were never adequately constructed to begin with, leaving the system susceptible to bacterial contamination, leaks, and pressure challenges. In Plainview, the community water system originally had old oil field pipelines that were reused as community drinking water pipes. In Seville, the community distribution lines are so leaky and corroded that there are constant major leaks and pressure problems in the system.

Adequate infrastructure for the water source itself is also a problem. Many communities have one or two wells, and when a well becomes polluted or a pump goes out, the entire community is without a safe water source. Drilling a new community well can cost up to $1 million, and funding is hard to come by. Wellhead treatment plants are generally too costly to operate and maintain for small systems alone. Surface water requires conveyance facilities (pipelines or aqueducts) to get the water to the community, a surface water treatment plant to disinfect the water, and water rights or contracts to use the water. All of this is generally beyond the means of small, low-income communities on their own. Because of this, many communities are now looking at consolidation and other forms of regional or shared solutions that allow communities to share water sources and create economies of scale that can make a safe source of drinking water more affordable.

Many of the poorest communities also lack water meters, and therefore often cannot incentivize or enforce conservation measures. In Lanare, lack of meters resulted in at least one customer irrigating their fields with water that had been treated for Arsenic. Arsenic treatment is extremely expensive so this caused the whole community water system to incur a major expense that could have been avoided had metering and conservation pricing been in effect. For Lanare, this expense ultimately led the community water system into over $100,000 in debt and eventually to receivership.

UNDERSTANDING THE ROOT CAUSES
Lack of local investment in drinking water infrastructure
Local development and redevelopment investments have largely bypassed small, rural communities. One extreme example of discriminatory infrastructure investment policies is in Tulare County, one of the poorest counties in the state. Tulare County also has the largest number of drinking water violations in California. The Tulare County General Plan from 1971, which was only updated recently, labeled 15 communities “non-viable” and lacking an “authentic” future. The General Plan’s policy urged the County government to withhold public investment and infrastructure from these communities, made up of mostly poor, immigrant Latino farm-workers. These “non-viable” communities still exist after 35 years. But due to lack of public investment, they must rely primarily on small, dilapidated water systems and private wells. Institutional racism, a lack of voting power and legal and language barriers to participation in the planning processes that affect the drinking water supply and quality have compounded the problem, resulting in major health disparities between those who do have a seat at the planning tables, and those who do not. To learn more about what CWC is doing to engage local communities in water infrastructure planning and funding processes, Click Here.

Barriers to infrastructure funding
Even when communities have the capacity to apply for grants, they face a long, bureaucratic funding process with barriers that make it difficult to plan and implement long-term solutions. Many communities have been waiting for a decade or more for funding for a new well and replaced distribution systems, and efforts to join communities together through a centralized treatment plant or system are often deemed ineligible for funding on technicalities that could have been prevented with the appropriate resources and technical consultation. As communities work through these processes, they can go a decade without safe drinking water, and until recently, no source of funding was available for interim solutions to ensure communities could access safe drinking water during this long waiting period.

To learn more about what CWC is doing to reform funding processes, Click Here.