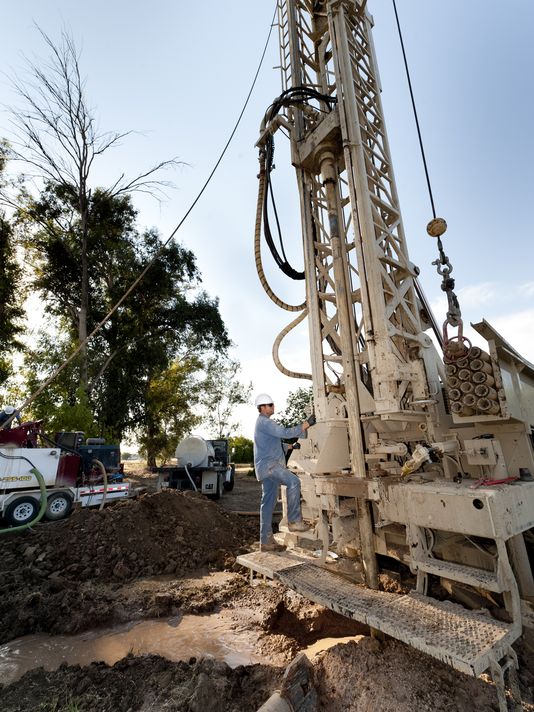 There was a burst of activity in Seville Monday afternoon as the Belknap Pump Company from Dinuba rapidly started to dig a new well about 500 feet from Stone Corral Elementary School.

“They are drilling as far down as they can to hard rock,” said Steve Worthley, Tulare County supervisor. “They’re hoping for at least 300 feet.”

The plan was to drill until nightfall.

A last-minute deal between Tulare County and the State of California Friday will provide the residents of Seville with reliable water, said Eric Coyne, spokesman for Tulare County.

“It was finalized with a handshake and email confirmation,” he said.

For years the small town of fewer than 500 residents has been plagued with contamination issues. Residents have struggled to get affordable access to clean water to bathe and cook.

The deal involved modifying a grant for building a 15,000-gallon water storage tank that would have cost more money over time than a new well because the first plan involved hauling water. The storage tank will still be built, but the new well be operational immediately, Worthley said.

The key to Monday’s success was securing a well driller on only 48 hours notice, he said.

Tulare County will advance the money to drill the well — $250,000 — and the Drinking Water Division of the State Water Board will repay it.

“We are paying the cost so the well could be drilled [as soon as possible],” Worthley said. He said the grant money is for low-income communities with proven contamination and is not drought-related.

By drilling a new well, it is hoped that the new well will exceed the current 55-gallons-per-minute flow for this northern Tulare County community of about 120 households, Worthley said. This water district was built on a linear system, meaning that the last household on the line would get no water during high water use times of the day.

“At the tail end of the line, everyone pulls water ahead of you,” he said.

When the water tank is in place, the new well could pump at night and store a supply of water in the new 15,000 gallon tank, Worthley said.

“This new well will go into service right way before the tank arrives,” he said.

As of late Monday afternoon, the new well was being drilled at Road 156 and Seville Road, about 48 feet from the old well.

This new well is in addition to a state grant for installing a drinking water vending machine on the property of the old Catholic Church property in Seville.

Tulare County took over the Seville Water District in 2009 through a court receivership. The water district has an old nitrate-contaminated well and cracked pipes that allow sand to flow through residential taps. Its water lines are almost 100 years old.

(PHOTO: Scottie Belknap with Belknap Pump Company, drills for a new well in Seville, a northern Tulare County community of about 120 households, where the existing water system has been plagued with contamination issues for years. Photo: Ron Holman)