In California's Central Valley, where verdant fields of fruit and vegetables unfurl under sunny skies, the water that feeds them -- and flows into taps across the region -- contains a toxic and silent poison.

The very same farmers who have tilled and cultivated the earth for decades in one of America's biggest produce regions have also poisoned it, dumping millions of tons of fertilizer, which has found its way into many of the region's aquifers. 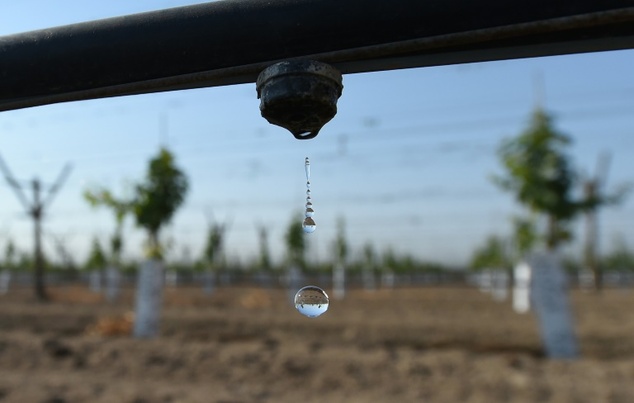 Nitrates, a residue left behind by intensive farming, now lurk in the water in a number of communities, many of them poor and rural.

For years, Cristobal Chavez has been drinking the water directly from the faucet, never imagining that he, his wife and their children were in danger of nitrate poisoning.

The water "tasted normal," said the former truck driver, who lives in the agricultural town of Porterville, is a foster parent and now runs a day care -- meaning lots of children have consumed the water in his home over the years.

Several months ago, the Community Water Center (CWC) nonprofit association discovered that water in the family's well contained twice as many nitrates as the maximum allowed under state standards.

According to a study by the University of California, Davis, some 250,000 people in the region are at risk of excessive exposure to nitrates.

Most of the tainted communities are small and cut off from larger water distribution networks, making them dependent on wells. The majority are poor, and most residents are Latino, with few speaking English well.

The California State Water Resources Control Board, which monitors public distribution systems in large cities, has no jurisdiction over private wells.

One of its branch chiefs, Kurt Souza, said that county authorities are "trying to target the areas they feel are the most critical," but admitted they had probably missed some contaminated spots.

The toxic effects of nitrates are widely recognized by World Health Organization and US health officials, and are particularly dangerous for children and pregnant women.

Nitrates can sometimes cause a deadly blood disorder called "blue baby" syndrome, in which the blood's capacity for carrying oxygen is reduced, in addition to causing increased miscarriages and fetal deformations.

The substance is also thought to play a role in kidney and thyroid problems, and may cause certain cancers.

Nitrates are "a public health emergency," said Jennifer Clary, an advocate at CWC.

According to a CWC report, the rate of blue baby syndrome is 40 percent higher in the Porterville area than the California average.

California's Public Health Department was unable to provide statistics on blue baby syndrome, and says it does not collect data on the broader impact of nitrates in the Central Valley.

"There is a total lack of transparency, this is of a crisis proportion," Erin Brockovich, the environmental crusader portrayed by Julia Roberts in her Oscar-winning role in the 2000 eponymous Hollywood film, told AFP.

"Most communities suffering are not sophisticated enough to demand change, and since they are predominantly from a migrant status there has never been a push really to get anything done," said Bob Bowcock, an expert who works with Brockovich.

Honorio Nunez, who is Mexican and makes a living picking oranges, discovered with the help of CWC that his tap water in Porterville is contaminated with nitrates and bacteria.

Although his family has been using water bottles, which have been delivered for the past two years by emergency services due to a drought that has dried out area wells, he and his wife worry about the water that they and their children drank before that.

"The vast number of smaller communities with this nitrate contamination are a ticking time bomb," Brockovich said.

Authorities have indicated a willingness to toughen legislation on the amount of nitrates farmers can use, but are still in the information gathering stage.

"It will take 10 years for the government to even regulate them," Brockovich said.

Of the 1,500 Porterville homes that are being connected to a larger water distribution network, only 10 percent are expected to be on-stream within the next year.

"If we don't do anything 80 percent of people (in parts of the Central Valley) could be impacted by nitrates by 2050," said Deborah Ores of the CWC.

Meanwhile, many of Porterville's residents are simply stuck, with no place else to go.

"We've seen people interested in buying the house," Chavez said of his property.

But when they find out about the nitrates, all hope will be lost, he said.

Nitrates Contamination Agriculture
Like us to spread the word