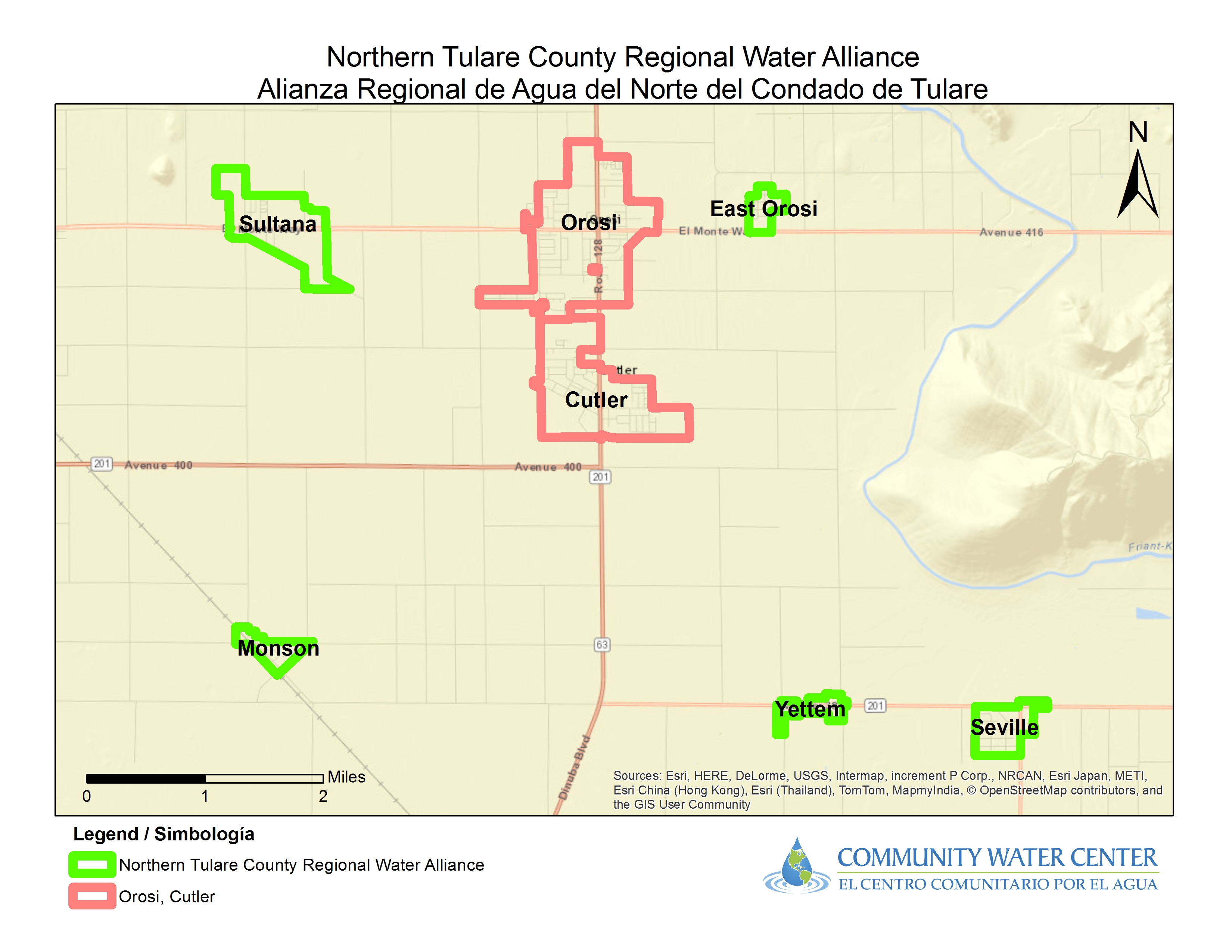 A regional collaborative effort seeking to develop a long-term solution to address the drinking water and water supply needs of the communities within the Northern part of the County of Tulare (East Orosi, Monson, Seville, Sultana and Yettem). The goals of this project are to, 1) identify regional alternatives available to help the region solve its water related needs, 2) identify adequate and community supported governance structures and 3) implement a solution that is supported by the region and can deliver safe, sustainable and affordable drinking water in the long term. Project Partners include the 5 identified communities, the County of Tulare, Alta Irrigation District, the  State Water Board - Division of Drinking Water, Community Water Center, Self Help Enterprises and Keller Wegley Engineering.

East Orosi, Sultana, Monson, Yettem, and Seville are unincorporated communities in the Northern part of Tulare County, and the vast majority of the area residents are low-income Latino farmworker families. For years, the Northern Tulare County (NTC) communities have struggled with providing potable drinking water due to contaminated groundwater sources with high levels of nitrates and DBCP. Currently, East Orosi is unable to provide safe drinking water due to nitrates, and Seville is in the process of replacing dilapidated infrastructure which often requires that residents boil their water. Further, Yettem and local schools remain at risk of losing their safe drinking water sources. On top of this, some districts are forced to raise rates and spend years trying to secure funds to address their drinking water challenges.

History of the Project

In 2007, the communities of Orosi and Cutler, in partnership with the Alta Irrigation District jointly funded a preliminary study which concluded that the best option would be a combination of groundwater and treated surface water. However, before this solution could be implemented, a full planning study was needed to identify groundwater and surface water supplies, evaluate feasibility, e.g. operation and maintenance and construction costs, lay out the plans for construction and evaluate and establish ownership and governance structure. Because of this the Orosi Public Utility District, (OPUD)  was named the lead agency and applied for planning funding from the Californian Department of Public Health (now State Water Board - Division of Drinking Water). OPUD was not able to access funding for the feasibility study because although at risk of losing access to safe drinking water, they are technically still in compliance. As a result, a larger collaborative effort was begun to include Sultana, Monson, Seville, and Yettem.

In 2012, a Memorandum of Understanding (MOU) was signed between the 7 communities (OPUD, CPUD, East Orosi, Sultana and the County of Tulare for Monson, Seville and Yettem) in an effort to overcome the funding hurel and reinforce the region’s interest in developing a regional, long-term solution that would meet the needs of multiple communities.

Although the MOU was not successful in overcoming the funding hurdle, it did trigger a more detailed review of the project by the funding agency. In late 2012, a meeting between the interested parties, County of Tulare and residents from the impacted communities met with the California Department of Public Health (now the State Water Board, Division of Drinking Water) to discuss ways to secure funding for this next phase of the project. CDPH identified  opportunities for the region to access funding by having a non-compliant community apply for and receive funding. After much negotiation, the region agreed to have the County of Tulare apply for and secure funding under the Seville and Yettem Project. By partnering with Seville, which was noncompliant in 2012, this project was able secure $247,580 in SRF planning money in late 2013 to conduct a Feasibility Study analyzing the technical and financial considerations (where the water comes from, where the treatment plant will be located, cost estimates, necessary permits, etc.) and has applied for $250,000 in pre-planning funds to  facilitate community engagement and evaluate the future governance structure and ownership of the Northern Tulare County Regional Water Project.

Because of OPUD’s involvement, the County of Tulare agreed to subcontract with OPUD and have their District Engineer conduct the engineering analysis. However, the County  has been named the lead agency and will be in charge of contracting the consultant to for the Pre-Planning Activities and will have full oversight of this planning effort.

Culter and Orosi chose to leave the alliance in 2017.

Despite the choice of Cutler and Orosi to leave the regional Alliance , there was a suggestion that the remaining 3 parties attempt to move forward. The willingness to advance was discussed with all parties, other Stakeholders like Alta ID and the State Water Board (SWB), resulting in the decision to move forward without Orosi and Cutler. The remaining parties agreed that there was more potential benefit at stake than cost. The final version of the  Joint Powers Agreement (JPA) was circulated for review in advance of the SWB’s September 30 deadline. By September 30, it had been approved by Tulare County and East Orosi, and on October 5 it was approved by Sultana, making the Northern Tulare County Regional Water Alliance official. Moving forward, the next steps are to complete an Alternatives Analysis and Engineering Report for a project funded by the SWB. CWC is committed to assisting the Alliance in the coming months as they begin to explore options for regional collaboration!

In addition to the NTC Regional Water Project, Seville-Yettem, East Orosi, and Monson-Sultana are also working on individual water projects to solve their immediate water needs.

A Project Steering Committee, comprised of representatives from the County of Tulare, State Water Resources Control Board - Division of Drinking Water, Keller Wegley Engineering Firm, the Community Water Center, and community residents was established to monitor progress of the study. The committee meets every second Tuesday of the month at the Alta Irrigation District in Dinuba. For more information or to access meeting minutes, please visit the committee’s webpage at: http://altaid.org/drinking-water-mainmenu.html