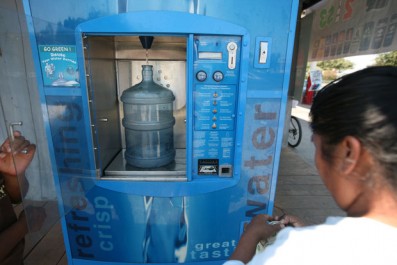 By Mark Grossi
The Fresno Bee

(09/15/2013) New research shows that a swath of San Joaquin Valley people living in rural poverty pay more than they can afford for their often-tainted tap water.

Two of every five households — nearly 4,000 customers — pay too much for tap water in a sampling of 51 small water systems across Fresno, Tulare and Kings counties, according to the study called “Assessing water affordability.”

And bills climb even higher for those who also buy bottled water to protect their families from the Valley’s underground water contamination.

“We confirmed what we had been hearing for a long time in communities,” said Carolina Balazs, a University of California at Davis researcher and consultant for the nonprofit Community Water Center in Visalia.

The Community Water Center, an advocacy group, joined California State University, Fresno and the nonprofit Pacific Institute in Oakland to produce the study, which was released last month. It included water systems in Sacramento.

The research is aimed at California legislators and other leaders faced with rebuilding crumbling water systems around the state. Future research will include a look at financially sustainable water systems in rural areas.

In the affordability study, the take-home message to the state: Craft new laws that help people cope with poverty, contamination and the added expense of bottled water.

“Legislators need to know there are many people who can’t afford an essential human need that most people take for granted,” said Maria Herrera, Community Water Center advocacy director.

Researchers found people are paying more than 2% of their household income for tap water in many places, such as in Allensworth in Tulare County, Armona in Kings County and Lanare in Fresno County.

The 2% threshold of affordability is set in a state law, Assembly Bill 2334, which passed last year. But researchers already see a problem with the state’s definition of affordability.

The threshold is applied to a median income for a water system, a common way to look at affordability. Half the ratepayers make more than the median, half make less. The approach allows poorer households to slip through the cracks, researchers said.

Even in water systems that meet the affordability threshold — including systems in Sacramento — thousands of poorer households pay more than 2% of their incomes for water.

The problem stood out in Fresno, Tulare and Kings counties. Based on the median income, nine of the 51 water systems surveyed in those counties did not meet the threshold. It’s 17% of the systems in the study, which means there is a significant problem.

But the numbers were much more daunting when researchers looked separately at households within the water systems, using U.S. Census data. Nearly 4,000 households paid too much for water — a whopping 40% of the people in the 51 systems.

Allensworth residents pay 3% of their income for tap water, the study showed. Add the cost of bottled water, and it climbs to 4.3%, more than twice the state affordability threshold.

Kayode Kadara, a retiree who lives in Allensworth, lives in a home with a reverse-osmosis filter to combat arsenic problems. The filter traps contaminants by forcing bad water through a membrane. At a price of $200 to $300, it was a peace-of-mind necessity for him.

But in the farmworker town of 500, reverse osmosis is beyond most folks.

“Paying for reverse-osmosis filters would be a hardship for people here,” Kadara said. “You have to understand that people don’t have enough income here.”

Researchers said state legislators must address that added cost for people who live in contaminated areas, such as the San Joaquin Valley.

The other part of the equation is the water systems themselves. They, too, face an uphill fight, said researcher Balazs.

In many places around the Valley, water pollution is likely to get worse because decades-old contaminants, called nitrates from farm fertilizers used in the past, are moving slowly into wells. Nitrates also come from septic tanks, sewage systems, dairy waste and rotting vegetation.

Balazs said, “More and more water systems may find themselves in a difficult financial situation, torn between the need to upgrade or increase treatment to ensure safe drinking water while also keeping water bills low enough for customers to have access to affordable water.”

By Stephanie Wendy, Visalia Times - DeltaDecember 16, 2014 Two Tulare County environmental groups were among eight across the Central Valley on Tuesday awarded a total $275,000 from the Fresno...

Water in America: Is It Safe to Drink?