After the drought: Private well owners left behind? 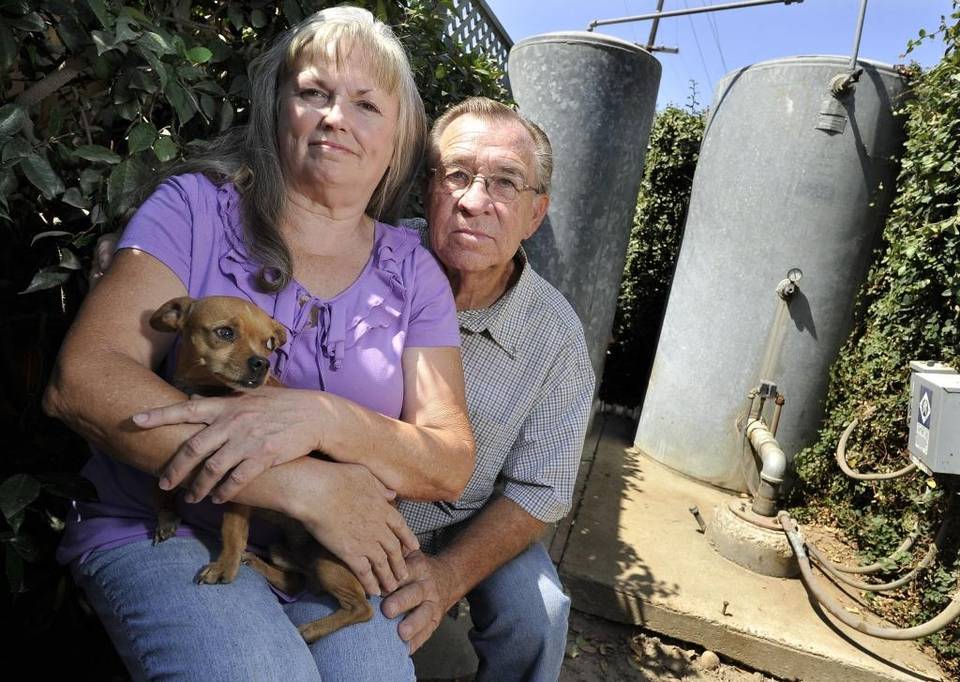 Verna and Carol Busby’s well ran dry in April at their home north of Visalia. A neighbor stepped forward to let them tap into their well until they can get a new well. Photo Credit: John Walker, Fresno Bee

Reacting to the drought emergency, state leaders have rescued trout from a warm San Joaquin River, offered $30 million in rebates for ripping out lawns and paid hundreds of millions to help communities facing water shortages.

Yet one small group of Californians soon will fall through the safety net, water advocates say. They are private owners of failed wells – thousands in the San Joaquin Valley. They’re getting water now, but they will be on their own again when the emergency money runs out.

The state Legislature last month balked at a measure that would have provided $10 million for grants and low-interest loans to replace private dry wells. The bill is now in limbo, even though many lawmakers seemed to like it.

Assembly Member Devon Mathis, R-Tulare, who authored Assembly Bill 954, says he is not giving up on his campaign to get the money set aside. He says it was a shock to see it bog down.

“This measure had unanimous support throughout the entire process, including a 78-0 vote on the Assembly floor,” he says. “AB 954 would directly help the most disadvantaged members of our communities, people who have no place else to turn.”

State Sen. Ricardo Lara, the Los Angeles Democrat who chairs the Senate Appropriations Committee where the bill was suspended last month, could not be reached for comment.

The line between public and private water systems is clear in California. The state does not monitor wells at people’s homes or in water systems with fewer than 15 hookups.

Public water systems – run by cities, counties, utility districts and other public entities – serve 95 percent of California’s population. They are monitored by the state. They can legally approach the state for public funding to build more permanent fixes.

Nearly 1,700 private well failures have been reported in Tulare County alone. Rempel says this won’t be the last drought California faces. She asks: Why not look at longer-term fixes?

“We clearly have a crisis,” she says. “Thousands of Californians lack running water, yet because of poor coordination and a lack of leadership at the state level, we have seen almost no lasting assistance for residents on private wells.”

A scramble in rural areas

Verna Busby, who lives just north of Visalia, was disappointed when she heard AB 954 had not passed. Busby, 63, and husband Carol, 66, were fortunate enough to find financing for a new private well after theirs went dry in April, but she says people need more options.

“I called everyone and for a long time I wondered if I was ever going to find any help,” she says. “This is not easy. You can live without many things. But you can’t live without water.”

Busby says California’s drought is not like a hurricane or an earthquake, but it is still a slow-motion disaster that is crippling many lives. She says authorities need to act with more urgency. Wells can cost $15,000 to $30,000 to drill, even more in some cases.

“People get the chance to get money for rebuilding in other disasters,” she says.

Busby says most people she knows are not looking for a grant or any kind of handout – just a loan and reasonable payments. People don’t want to give up their homes, she says.

The Busbys built their home four decades ago. Their original well struck water at 30 feet deep back in the 1970s, she says. The well went dry this year at a depth of 107 feet.

Neighbors lost their wells, too. But neighbors help each other out in the country, she says. The Busbys allowed one neighbor to hook up to their well for several weeks earlier this year while a new one was being drilled.

In April, not long after the neighbor’s well came online, the Busbys’ well went dry. So their neighbor returned the favor, allowing them to hook up.

“We are lucky,” Verna says. “Our toilets keep flushing. But losing a well is a sick feeling. We live just on Social Security.”

The state dedicated more than $650 million to the drought emergency, but it won’t last forever. And neither will the stopgap measures, such as delivering water to large tanks so people can at least flush their toilets and shower during the crisis.

“With hauled water costing United Way upwards of $100,000 a week to deliver to Tulare County residents, it is important to think about how to meet immediate needs while building long-term resiliency,” says Rempel of Community Water Center.

The list of people who need a longer-term fix is growing, says the nonprofit Self-Help Enterprises in Visalia. Self-Help is contracted with six of the San Joaquin Valley’s eight counties from Stanislaus to Kern.

Susan Atkins, Self-Help’s program director of Partner Services, says the organization has heard from more than 200 residents. Everybody with a dry domestic well can get the tank and water deliveries, but it will cost millions of dollars to drill new wells for all the residents who may need one.

After the emergency money runs out, people will need another answer, Atkins says. Some might have the opportunity to hook up with a nearby city or water system. Others might join neighbors and form their own small mutual water company.

“For those who are more isolated, a new well may be necessary,” Atkins says.

Applying for funding, planning and building these projects is not an easy road for most people, advocates say. Even with the guidance of a group such as Self-Help, it can take years.

Beyond the bureaucratic hassle, it takes a toll on the people who live with it day in and day out, Atkins says.

“This isn’t something you can fix for very long just by running a hose from the neighbor’s house and hooking it up to yours,” she says.

Assembly Member Mathis agrees, saying he would try to push the measure through in some other way this year. If that doesn’t happen, he says he will introduce it again next year.

“This drought is more than a crisis,” he says. “It is a natural disaster and the California Legislature must do more to help.”


Original story: http://www.fresnobee.com/news/state/california/water-and-drought/article34106748.html#storylink=cpy
Drought
Like us to spread the word