Safer water for schools in Arvin and Lamont 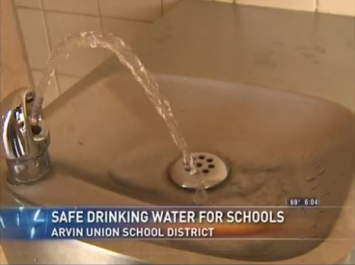 (11/07/2013) KERN COUNTY, CA – Access to clean water is a major concern in central California, where more than 100 communities in the valley don’t have it.

But, an initiative led by community groups in Kern County is helping schools in Arvin and Lamont keep their drinking water safe from arsenic.

By the end of the year, all K-8 schools and Head Start Centers in Arvin and Lamont will have water filters on the playground and classroom drinking fountains. They’ll also be in kitchens, all in an effort to get rid of arsenic.

Though it will take years to come up with a long-term solution for water contamination, this step is making a big difference

For students and staff in the Arvin Union School District, drinking from the water fountains could be dangerous.

“For some time now, the community of Arvin has had a water issue with the acceptable levels of arsenic and nitrates in the water,” said Superintendent, Dr. Michelle McLean.

Those contaminants can lead to reduced mental funtion in children, various forms of cancer, and Type 2 Diabetes.

“There have been requests made over time for us to filter the water here at the schools, but it’s really cost prohibitive, and the costs we receive from the State Department of Education and taxpayers are really meant to go toward the education,” McLean said.

So the Community Action Partnership of Kern teamed up with the school district, the Community Water Center, and the Committee for a Better Arvin to come up with a temporary solution, filters on all drinking fountains and in kitchens.

“We have to pay double for water here because we pay the water district their bill and then we have to pay for bottled water which we can’t drink the water from the tap.”

Salvador Partida says his concern is for the kids who might not be able to bring bottled water to school every day. Though he hopes for a permanent solution to the water problem, this project is a good place to start.

“It’s a band aid, but nevertheless it’s going to help maybe for the duration until we get something fixed. But, it’s worth it,” Partida said.

This project will be in place for three years at no cost to the schools or Head Starts thanks to funding from various partners.

Students in Arvin to get clean water

By Amanda GomezABC23 News - Kero Bakersfield (08/27/2014) ARVIN, Calif. - Students in Arvin have been dealing with unsafe drinking water for years, but now a private health foundation is...

Water Technology Online https://www.watertechonline.com/articles/167690-pwqa-donates-2500-to-community-water-center (2/6/2014) TUSTIN, Calif. — The Pacific Water Quality Association (PWQA) has announced that it is donating $2,500 to the Community Water Center (CWC) to assist...

By Alice DanielCalifornia Healthline https://www.californiahealthline.org/insight/2013/partnership-brings-clean-drinking-water-to-central-valley-schools-head-start-programs (11/14/2013) ARVIN — Thousands of students in the south Central Valley who didn’t have access to clean drinking water in their schools will now...

By Kerry Klein KVPR May 4, 2016 Original Story: https://kvpr.org/post/it-looked-really-dirty-now-arvin-kids-drink-clean-water-schools     First-grader Shiloh Rivera holds up a reusable water bottle donated to every student at his Arvin school as part of an...