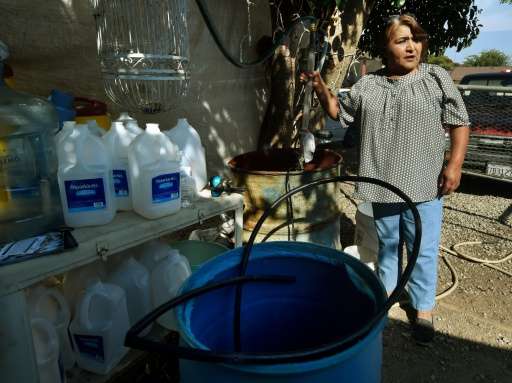 A washing machine stands in the middle of Maria Jimenez's California yard, like a redundant relic of modern life. Nearby are several rented mobile toilets, no longer in use.

For four months, she and her family have had no running water.

"We are trying to live a normal life," the 52-year-old told AFP in the town of Monson, 200 miles north of Los Angeles.

Hers is one of a growing number of generally lowincome households with no direct access to water in central California's Valley, known as America's food basket, where four years of extreme drought have left many residents high and dry.

Jimenez and her husband use plastic plates and cups in order to save using water for washing the dishes, all the while generating piles of garbage and extra expenses.

To take a shower, they've created an elaborate system that pumps bottled water up to the roof of their rented house and back down to the shower head.

But whenever possible, they try to wash at the homes of friends and family.

Even before the well that supplied their house dried up, they couldn't drink its water, which was polluted with pesticides from nearby fields.

Now they have no water at all, and things aren't likely to change anytime soon.

"We don't have water in a country that is rich," Jimenez's neighbor Laura Garcia said.

Born in Mexico, she recalled how as a girl living in a small village near Guadalajara, she would haul water more than a mile (1.6 kilometers) to her house.

Today, even her childhood hamlet in Mexico has running water. She doesn't dare tell her family back in Mexico about her situation in the United States.

"They would tell me 'Come home! What are you doing there?'" she said in Spanish.

Servando Quintanilla, who owns the two women's houses, said the situation is a nightmare.

The retired farmworker said the drying up of his well was a financial disaster.

He can no longer charge rent to those living on his properties, which represent a $200,000 investment on his behalf.

His only option is to dig a new well, which would cost $35,000 and likely also be polluted.

Due to the drought, farmers are unable to rely on surface water and have become totally dependent on their wells, pumping much more groundwater than in the past.

Ryan Jensen, spokesman for the Community Water Center, which works to make sure all communities have access to water, estimated that some 5,000 people in Tulare County, where Monson is located, don't have access to drinkable water.

Monson is now part of a list of dry communities—among them Highland Acres, Porterville, Woodville and Terra Bella—where many residents have not had running water for nearly two years.

Maria summed up her feelings with a mix of anger and powerlessness. She said she was mad because the small children in her family needed water.

She also said her family's livelihood in agriculture 2 / 3 was dependent on it, as is the produce they eat.

The problem is specific to California's agricultural regions.

Cities have sophisticated systems of aqueducts and other supply routes to bring water from northern California or from the Colorado River to the east.

California authorities are studying long-term solutions to link isolated communities to larger cities. But that requires costly solutions, and lots of time.