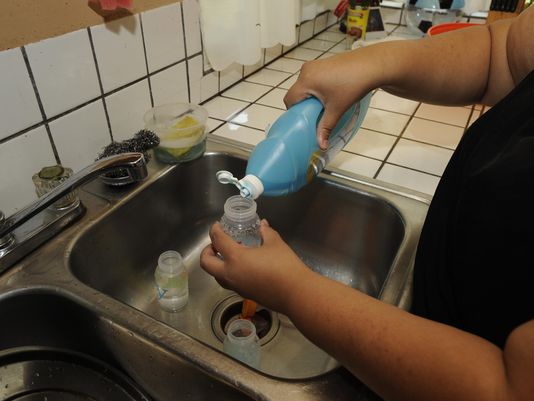 Californians relying on small water utilities to bring drinking water into their homes, or who work or go to school in places providing their own water, are far more likely to be exposed to lead, according to a new analysis of Environmental Protection Agency data by The Desert Sun and USA TODAY.

Small public water systems across the state made up the vast majority of systems found to have high levels of lead in their drinking water or testing violations since 2010, the analysis found. These systems typically exist in rural areas and serve less than a few thousand people. Some serve only a few hundred or even a few dozen people, sometimes at a single school or business.

The results are evidence that while most water utilities across the state have clean records when it comes to lead, smaller agencies with limited resources more often struggle more often to comply with safety protocols. Neither the state nor the small water systems have the capacity to monitor for safety of drinking water as often as larger water systems do. Regulators are encouraging consolidation and a new law requires any new small system coming on line to first consider joining an existing system.

“The real interesting story is the amount of testing that’s required by a water system,” said Rick Williams, board president of the Bodega Water Company, which serves 38 households in rural Sonoma County.

The Bodega Water Company has seen excessive levels of lead in drinking water five times since 2010. According to Williams, the problem is not the water or wells that supply it but is old lead plumbing fixtures inside the community’s historic homes.

“We have no control over what people do in their own homes,” he said. “We can’t tell people they have to replace their own pipes.”

Tests for lead and copper are typically required every three years nationally, but a high lead reading would initiate follow-up tests every six months. The Bodega Water Company last saw a high lead reading in 2012. Tests in 2013 and 2014 then showed levels within acceptable standards, according to state testing information published online.

The toxic metal can cause brain damage and other physical ailments if ingested and can be particularly harmful to children. Experts say no amount of lead is considered safe.

While experts say lead has been less of a problem in California than other states, concerns about small water systems not meeting standards for other contaminants have prompted state officials to try and limit the number of new small systems and combine existing systems when possible.

The Bodega Water Company serves about 77 people, which Williams said includes some part-time residents. It’s among the smallest of California’s more than 7,600 public water systems.

The Desert Sun analysis of EPA data found that since 2010, 541 public water systems in the state either had drinking water tests with high lead levels or violations for improper testing. That is about 7% of all systems statewide.

“The smaller water systems just suffer from not having an economy of scale. They don’t have sufficient customers to pass charges on to, so even the monitoring costs really hit them in the pocketbook,” said Cindy Forbes, deputy director for the State Water Resources Control Board’s Division of Drinking Water.

Small water systems are not a California-specific issue. As a new USA TODAY investigation found, about 4 million Americans get water from small operators who skipped required tests or did not conduct tests property, and about 100,000 people get their drinking water from utilities that discovered high lead but failed to treat the water to remove it. Dozens of utilities took more than a year to formulate a treatment plan and even longer to begin treatment.

Forbes said some states take on the responsibility of monitoring small systems. In California, she said, “It would take an army of staff just to do it.”

Instead, state officials are trying to reign in the number of small water systems by making it harder for new ones to form and encouraging – even forcing – consolidations.

A law signed by Gov. Jerry Brown in September that takes effect in January requires anyone seeking a permit for a new water system to look into connecting to an existing system and compare the costs of consolidation versus creating a new system.

State Sen. Bob Wieckowski of Fremont, who sponsored the bill, said in a statement earlier this year that too many water systems “lack the expertise and financial resources to effectively and safely provide service to their customers.”

Wieckowski’s bill followed a 2015 report by the State Water Resources Control Board that found small water systems more often have violations for contaminants such as arsenic, nitrate and uranium.

Separately, the state has begun pushing water systems with poor safety records to consolidate with neighboring systems. Since 2015, California water officials have encouraged seven consolidations, and in April they announced their first mandatory consolidation. After multiple high levels of arsenic, the Pratt Mutual Water Company, which served about 1,500 mostly poor and Latino residents in the Matheny Tract community of Tulare County, was mandated to join the city of Tulare system.

Following a seven-year wait and initial agreement that led to litigation, the state-mandated consolidation came to fruition on May 31.

Before the consolidation, Javier Medina complained the water piped into his home smelled and didn’t seems to help keep him or his clothes clean. Buying bottled water for drinking and cooking was a constant household chore.

But since connecting to Tulare’s water system, Medina and his family can consume their water without concerns.

“Residents are now happy,” he said. “We have clean water. We don’t worry about the contaminated water.”

At least two small water systems that serve a single school are using state grant money to consolidate with other systems, but the process has been slow.

Students at Orange Center School, a K-8 school outside of Fresno, have relied on water coolers instead of the school’s built-in drinking fountains for more than two years because of high lead readings going back to 2010.

After hoping to join the city of Fresno’s water system before the start of the current school year, school Principal and Superintendent Terry Hirschfield now hopes work will begin over the upcoming winter break.

“The kids are not at risk and our parents are satisfied with us providing them clean drinking water,” Hirschfield said.

Also in Fresno County, officials with Fairmont Elementary School have been working since 2009 to connect with a nearby water utility. The school’s own system was giving students and staff water with high levels of nitrate, a naturally occurring chemical that can be elevated because of agricultural runoff. The school has turned off its taps and instead relied on bottled water for many years, possibly as long as a decade, said Richard Sepulveda, chief operations officers for the Sanger Unified School District.

Since 2010, the elementary school has exceeded acceptable levels of lead seven times, the most of any water system in the state. Because the pipes aren’t being used, it’s possible for lead to accumulate over time.

Sepulveda said he knew nitrates were a problem but not lead. “It takes a while,” he said of the school’s plans to join another water system.

“We got awarded the grant – I want to say three or four years ago, and it’s just now that we’re getting funded.”

North in Sonoma County, the community of Bodega sits among heavily wooded hills about seven miles from any other water provider. Williams, the Bodega Water Company president, said he can treat the well water to make it less corrosive to lead pipes, but as far as consolidation, he’s in the same situation as other small, remote systems.

“It’s not economically feasible to do anything like that,” he said.