(05/04/2014) PORTERVILLE — Outside her front door, Carmen Almanza has a postcard view of the Sierra Nevada and a huge pot of water for drinking, washing dishes and flushing the toilet.

Carmen, 79, and husband Al, also 79, have lived in this cozy house 33 years, raised seven children and never worried about water in ruralTulare County. But when the kitchen tap suddenly died one morning in early April, they knew their private well had run dry.

After a month of feverish calls, Carmen said she can't find help for a $15,000 loan to drill the well deeper. They've been living without running water ina kind of financial limbo.

Their small income covers their house payments, but it's too low to qualify for a federal loan and frustratingly too high for a grant. And most of California's $687 million drought-relief money comes from bonds, which authorities say cannot be given to individual residents.

Bottom line, the Almanzas are falling through a crack in a system that threatens to leave them dry in the sweltering San Joaquin Valley summer.

"We have relatives who want us to move in with them," Carmen said. "But we don't want to leave. We love it here. We raised our children here. We don't want a handout, just a little help."

Such stories are beginning to sprout throughout rural Valley areas as summer nears after one of the driest winters in decades.

There is precious little river water for farmers, who are now forced to pump groundwater to keep their fields alive. The water table is dropping swiftly in farm country.

Tulare County leaders said they are in drought triage. They said more than a dozen private well owners are looking for help, and many others may not have reported their problem yet. In other words, this could get worse.

"The county is very concerned," said Eric Coyne of the Tulare County Economic Development Office. "We're searching for state and federal funding, but there is very little relief designed for private well owners."

How many people are losing wells at their rural homes around the Valley and California? Nobody knows. Government agencies don't track private wells in any detail.

Tulare County has more than 20,000 private wells, according to a 2006 State Water Resources Control Board study that was updated last year.

Counties issue permits for building and disposing of wells. Stanislaus County is beginning to study a groundwater management plan that might include financial help for private well owners.

But generally counties don't have the money to drill new wells for rural residents. In counties where the drought hits hardest, leaders also are focused on trying to find help for entire communities, in addition to working with private well owners.

The Almanzas' dry well has been discussed at length with the U.S. Department of Agriculture Service Center, which is trying to help the couple.

Sally Tripp, a rural development specialist with USDA, said her department is looking for a suitable funding category.

"We're trying to be creative to see if they can fit into a program where we have some flexibility," she said. "We've had lots of calls about private wells — more calls, by far, than we have had in the last few years."

State leaders also are trying to find solutions for private well owners by helping to fund extensions to public drinking water systems, though that option may not work for the Almanzas.

The California Department of Public Health said it could help 15 or more homes consolidate into a drinking water system that could get funding. CDPH also said it is prepared to work through local public agencies to provide private well owners with interim water.

Even if they had the money, the Almanzas would be waiting in line with many others who need a well drilled. The wait list is six months to a year, county and federal officials say.

But the elderly couple on a fixed income needs assistance right now, said the Community Water Center, a Visalia advocacy group that specializes in helping rural, low-income residents and communities of color.

"Drought relief from the state and federal government is wonderful, but nobody is looking to help the people hit the hardest," said Maria Herrera, community advocacy director at the center. "Why is it that the burden falls on these individuals and advocacy groups to find a way?"

The well at the back of the Almanza property is about 75 feet deep, and it has provided water since at least the early 1980s. After it went dry, a nearby neighbor let them hook up to his water supply until his private well began to fail.

"The wells are all having a problem in this area," said Al, who had been a gardener and landscaper until a few years ago when crippling arthritis in his knees and back left him unable to work.

Now, one of the Almanzas' sons, Victor, 54, fills plastic-lined trash cans with water from his hose in Porterville and hauls them out to his parents' house every few days.

On the walls of their home, Carmen and Al have photographs of the Almanza children, including shots of those who have been in the military. There also are treasured portraits of themselves, dating back to 1950.

In their kitchen, the Almanzas often use paper plates to avoid dishwashing after meals.

Al leans on his walker and watches as Carmen, his wife of 57 years, struggles to lift a bucket of water from the front yard. She hauls it to the pink-painted bathroom and dumps it into the toilet to flush. 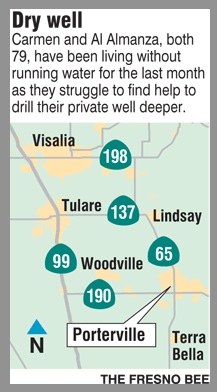 UPDATE: Due to this story being run in local news, numerous people have stepped forward offering assistance to the Almanza family and soon a new well will be drilled at their home free of charge. Read about it HERE.