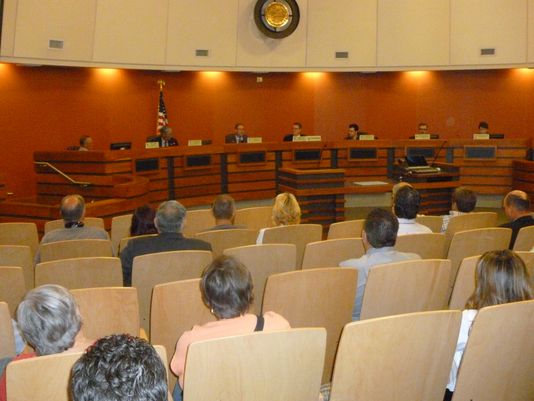 Tulare County schools where students can’t drink water from fountains or taps will be getting some water from the state.

That’s because the California Water Resources Control Board has awarded two grants totaling $1.5 million to the Tulare County and the County Office of Education to buy bottled water for disadvantaged schools with bad water quality or limited water access.

Phil Cox, chairman of the Tulare County Board of Supervisors, announced the awards Tuesday during a special night meeting at the Tulare City Council Chambers inside the city’s library.

He said the process to get the grants went remarkably fast, from initial discussions with state officials about two weeks ago – in which county officials were told about $4.5 million in grant money available to buy water for schools – to notification on Friday that Tulare County would get a large chunk of that money.

And by December, county officials could find out whether an additional $500,000 in grant money to buy water for schools may be directed here, county Chief Administrative Officer Jean Rousseau said following the meeting.

Cox told the crowd at the start of the meeting that county officials originally planned to apply for just $250,000, but Control Board officials encouraged them to team up with the county Office of Education and apply for a $1 million grant

County Superintendent of Schools Jim Vidak was on vacation at the time, “and we needed his approval, so somebody had to track him down,” said Cox, explaining that the county applied for the grant on the Office of Education’s behalf.

“This is something we wanted to do because it helps these small school districts,” he added.

Tulare County was awarded the $1 million it applied for, along with an additional $500,000, Rousseau said.

As for what the money will pay for, it will go to disadvantaged schools – those with high numbers of students on assisted or free lunch programs – where clean water isn’t accessible. The money will pay for gallon-sized or larger jugs of water that teachers and school staff will use to fill reusable plastic bottles that will be distributed to students as part of the program.

As for which schools will get the water, Rousseau said Tulare County officials listed about 10 that could use the water assistance in the grant application, including elementary schools in Seville, Alpaugh and Terra Bella. But state officials will look at the schools that meet the eligibility criteria and choose the ones to get the free water.

Also not clear Tuesday night is when the money may become available to those schools.