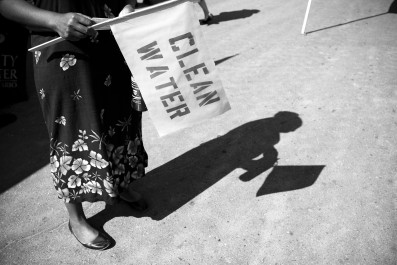 (09/03/2013) A recent change in state rules has allowed some of the country’s poorest water districts to get emergency help while officials work to unravel years of red tape.

Dozens of small water systems throughout the county are plagued with groundwater that exceeds federal standards for nitrates, arsenic or bacteria. Many of the districts also rely on aging infrastructure that regularly sends mud or sand straight to homeowners’ taps – or doesn’t manage to deliver any water at all.

Paul Boyer, a community development director for Self-Help Enterprises, one of the nonprofit organizations trying to organize relief for many of the country’s beleaguered systems is optimistic the change signals the start of a new era.

“We’re making progress but we’re used to a process that takes years,” he said. “If you’re living in a community with unsafe water – and you’re paying for water that’s unsafe to drink – a few years is a very long time.”

In 2008 lawmakers passed a bill sponsored by State Sen. Don Perata (D-Oakland) that would direct $829 million in bonds to water projects throughout the state. Tucked into that bill that was $2 million that would go to Tulare, Fresno, Kern and other San Joaquin Valley counties to develop an integrated water quality and wastewater treatment program for its disadvantaged communities.

Five years later Tulare County, the Community Water Center, Self-Help Enterprises and various state agencies are almost finished with the Herculean task of identifying the challenges faced by each district. They’re also trying to develop a blueprint for a series of fixes. Planning is already in the pipeline for 16 of the county’s hardest-hit systems.

It quickly became apparent those fixes could take years – so this winter emergency funding from the California Department of Public Health was also approved for districts that are simple unable to provide safe water to their constituents. The results were almost immediate. Just a month after the emergency funding kicked in, the 80 residents of West Goshen were suddenly without water for several days after a 350-foot-section of pipe collapsed. Emergency funding from the state allowed the district to hook up to Visalia’s water company, Cal Water – at a price tag of $240,000

Today, Seville is looking for a site for a test well and the state is funding the plans for a long-term solution.

“There are some planning projects that are spawning from this study,” said Ben Guiliani, executive officer of Tulare County’s Local Agency Formation Commission, the agency responsible for overseeing the county’s special districts. “It’s possible some district formations or reorganizations could come out of this process.”

In the meantime, officials are setting up a water vending machine in Seville that can handle 5-gallon jugs and searching for a test well site. The vending machine will cost about $12,000 – but there will be other expenses, said Maria Herrera, community advocacy director for Visalia’s Communit Water Center.

“We need something that will provide water for 36 months,” she said. “That’s how long it’s going to take for a solution.”

Other districts are mulling in-home filtration devices or bottled water to bridge the gap.

Permanent fixes won’t be as easy to come by. Many of the water systems simply aren’t large enough to generate money for repairs or a trained support staff. Herrera said the vast majority of the systems are managed by volunteers.

“The study is creating a space for people to talk about what’s not working.” she said. “We’re trying to find a way that volunteers don’t need to the management of the systems.”

In the meantime, critical well tests are being completed, board meetings are being held – in some cases after months of cancellations – and officials are trying to navigate the bureaucracy at the state level to bring the funding to Tulare County. In some areas with chronic water problems, like Allensworth and Alpaugh, nonprofits have stepped in with leadership training, so board members could learn to collaborate.

“That’s probably the biggest area of improvement,” said Denise Atkins, Tulare County’s administrative analyst for water resources. “In some of those communities, the oldest person is the one who takes care of the water system – even if they don’t have any water experience and the board is comprised of the few people willing to do the job. Now they can learn from one another.”

While the districts are getting more organized, attention from lawmakers and the media has helped to speed the turnaround for funding. There are five bills dealing with safe drinking water and disadvantaged communities pending the Assembly this session, three of which are sponsored by Henry Perea (D-Fresno).

“It’s a very slow process and a lot of people are tired of waiting,” Atkins said. “They just want to turn on the tap and have clean water come out.”

Students in Arvin to get clean water

By Amanda GomezABC23 News - Kero Bakersfield (08/27/2014) ARVIN, Calif. - Students in Arvin have been dealing with unsafe drinking water for years, but now a private health foundation is...

Water Technology Online https://www.watertechonline.com/articles/167690-pwqa-donates-2500-to-community-water-center (2/6/2014) TUSTIN, Calif. — The Pacific Water Quality Association (PWQA) has announced that it is donating $2,500 to the Community Water Center (CWC) to assist...

By Alice DanielCalifornia Healthline https://www.californiahealthline.org/insight/2013/partnership-brings-clean-drinking-water-to-central-valley-schools-head-start-programs (11/14/2013) ARVIN — Thousands of students in the south Central Valley who didn’t have access to clean drinking water in their schools will now...

By: Lewis Griswold The Fresno Bee February 7, 2017 Original story: http://www.fresnobee.com/news/local/water-and-drought/article131307234.html The problem of contaminated drinking water in small communities such as Seville in Tulare County can be solved if the...