Being Undocumented Means They Can't Vote, But They Registered Those Who Can 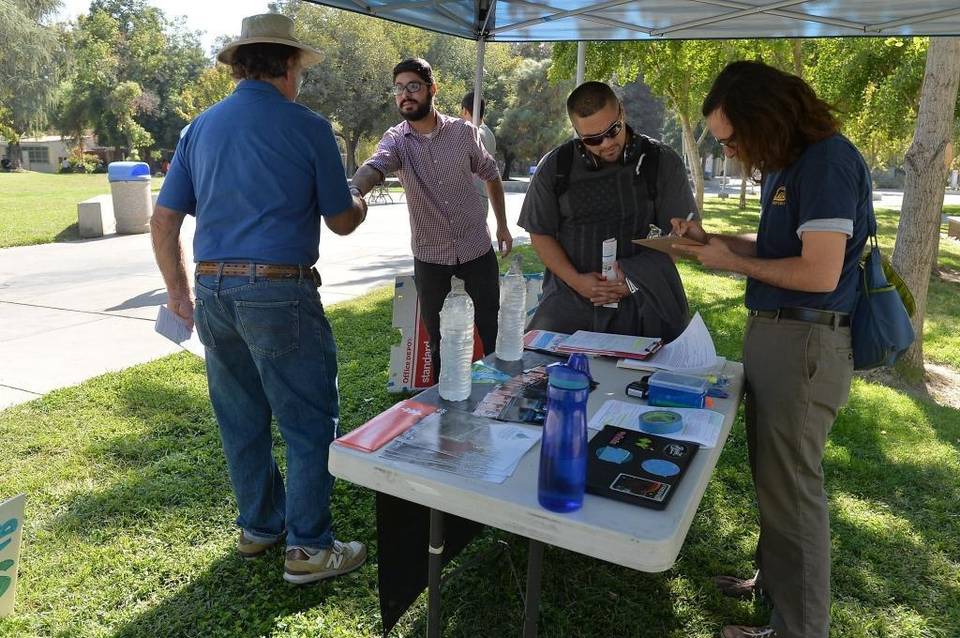 Pedro Ramirez is the head of voter outreach for the Visalia-based Community Water Center – but he can’t vote.

Ramirez was born in Jalisco, Mexico, and brought to the United States illegally at age 3. He now holds a work permit and temporary protection from deportation under the Obama administration’s 2012 program, Deferred Action for Childhood Arrivals.

“People that can register to vote should, and they should vote because there’s people like me that can’t,” he said.

In an election that has spurred record participation among underrepresented voter groups, non-citizens also are getting involved. With immigration a focus of the presidential race, many see their participation as an opportunity to impact the politics that will shape their future in this country.

Ahead of Nov. 8, undocumented immigrants are canvassing neighborhoods, staffing phone banks and educating voters on issues on which they don’t have a say. Nonprofits utilized noncitizens in voter registration drives, and Democratic presidential candidates Hillary Clinton and Bernie Sanders incorporated them into Latino outreach efforts.

Ramirez, 28, is one of dozens of undocumented residents in the Central Valley who have been working or volunteering for voter registration and education efforts. He also is known for being the subject of national news reports in 2010 and 2011 after he was elected Fresno State student body president and his immigration status was exposed.

Earlier this month at College of the Sequoias in Visalia, he and two other organizers set up a booth. They laid out a spread of voter registration forms, pamphlets and two bottles filled with murky water from the communities of Sultana and Cutler.

The effort was nonpartisan, and both Republicans and Democrats were registered. His goal was to educate voters on water quality, funding and infrastructure issues. Tulare County has felt the state’s five-year drought the hardest, with more jobs lost, wells gone dry and water contaminated.

Ramirez talked to voters about the nonprofit’s effort to persuade county leaders to enact an emergency ordinance limiting groundwater extraction because of the drought. He said most people don’t connect water issues to voting, especially via the local public utility districts, whose elected members often “win by default.”

“The goal is to change the culture of voting in the Valley,” he said.

Ramirez even registered his younger brother and extended family members who are citizens. A recent national survey of nearly 1,500 DACA recipients said the program could be a strong motivator of civic participation, with 80 percent of those whose family members are citizens over age 18 being registered to vote.

DACA recipients, who must meet criteria including having been born after 1981, aren’t the only undocumented immigrants participating in voter registration and education.

On a recent Monday in Selma, three undocumented volunteers with Fresno-based Faith in Community talked strategy about how to persuade more infrequent voters to turn out to the polls. Some 20 canvassers with the organization aren’t citizens.

Maura Fabian, 43, works at a chocolate factory six days a week. She has volunteered with Faith in Community for two years, but didn’t get involved in voter outreach until this election.

She and the others, who are farmworkers, spent the last few Sundays – their only day off – canvassing around Selma. They were surprised to learn how many registered voters don’t submit ballots.

Fabian’s motivation for volunteering was Republican presidential candidate Donald Trump, who she said has instilled fear in her community. Trump has pledged to deport people living here illegally.

The effort is nonpartisan, but Fabian and the others use their life stories to motivate people who are eligible to vote.

Reyna Aguilar, 36, an undocumented mother of two who have DACA, uses her experience to sway voters who also have family members in the program. Some don’t realize DACA is the result of an executive action, and could change with the next president.

Fabian’s children were born in the United States.

“It would be a marvelous dream to become a citizen and vote,” she said. “And then to impress upon my children their responsibility as citizens of this country to go out and vote.”

~THESE ARE PEOPLE WHO ARE STILL AFFECTED BY THE DECISIONS OUR ELECTED OFFICIALS MAKE. THEY’RE IN THE SITUATION WHERE THEY CAN’T VOTE BUT STILL BELIEVE IN THE POLITICAL PROCESS OF THIS COUNTRY.~

“These are people who are still affected by the decisions our elected officials make,” said Samuel Molina, California director of Mi Familia Vota, which has registered more than 6,000 voters in Fresno County since January. “They’re in the situation where they can’t vote but still believe in the political process of this country. It’s important that those who can vote hear from them because, all too often, people who are eligible to vote are too apathetic to do it. To hear from a person who can’t vote is powerful.”

Jessica Vaughan, policy director at the Center for Immigration Studies, which favors reduced immigration, said the involvement by undocumented immigrants in voter outreach shows how little they feel threatened by enforcement of immigration laws under current policies.

“No doubt they are trying to register voters who will vote for the candidate that they feel offers their best hope to be able to stay, and, of course, that would be Hillary Clinton,” she said. “I don’t think their efforts will make much of a difference, because typically American voters vote in their own personal interests more than the interests of others.”

Voting on his behalf

Ramirez, of the Community Water Center, became interested in politics because of his immigration status and started getting involved while he was a student at Fresno State.

After being elected student body president in 2010, Ramirez was outed as undocumented in an anonymous email sent to The Bee and other news outlets. Afterward, he organized a campus rally in support of the federal DREAM (Development, Relief and Education for Alien Minors) Act. The legislation, which failed the same year, would have allowed some longtime residents like him to become legal residents after spending two years in college or the military.

Once he graduated with a bachelor’s degree in political science, Ramirez got a master’s degree in public policy and administration from California State University, Long Beach. He spent four years working for former state Assemblyman Gil Cedillo, who is now a member of the Los Angeles City Council.

Ramirez started at Community Water Center earlier this year. As the director of organizing, Ramirez and his team of six registered more than 400 Tulare County residents to vote in the two months before the deadline.

“I feel as though every time we register somebody, maybe they’re voting on my behalf.”

Why Is an 11-Year-Old Registering His Neighbors to Vote? It’s the Water