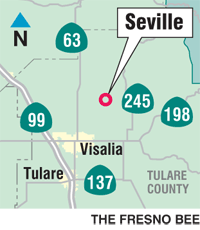 Drought and tainted water have nearly shut down people's taps in Seville, the north Tulare County town where the United Nations three years ago found decrepit plumbing and public neglect.

The drought this year is forcing more groundwater pumping, making the water table sink quickly. Seville's lone water pump is losing pressure and sucking in contaminants. For weeks, the 500 residents have been told to boil their water.

But the dry year may have been a good thing. It has triggered emergency state funding and temporary fixes that have been elusive for years in Seville.

The town will get bottled drinking water, and more interim measures are on the way.

The bottled water delivery will begin at 8:30 a.m. Thursday under Tulare County's Office of Emergency Services authority, which is separate from the other emergency efforts. The American Red Cross will help deliver the water to each home in Seville.

The water system will be taken offline on Thursday for two hours as repairs are made to help restore more water pressure.

Work will soon start on another short-term solution -- a project to get residents filtered water from a vending machine.

After years of bureaucratic and technical funding snags for Seville and other small towns with water problems, that's big news.

"It's lightning speed," said senior administrative analyst Denise England of the county's water resources department. "We have not seen this historically."

The United Nations visited Seville in 2011 on a worldwide tour of places where drinking water is substandard, including many Third World countries. The organization urged state and federal leaders to move quickly on Seville's problems, but the town's system continues to limp along three years later.

County leaders stepped in to help the town in 2009 when Seville's private water-system owner went bankrupt. The county is working with state officials on a long-term fix that will take years to complete.

Meantime, residents have been living with periodic orders to boil water when bacteria is detected. The town's well now is pulling in nitrate-laced water, meaning the system is useless for drinking and cooking.

Nitrate contamination comes from fertilizers, septic systems and decomposing vegetation. It is a chronic problem in Seville and many small towns in San Joaquin Valley farm country.

The chemical causes a possibly fatal blood disease in infants, and it cannot be boiled out of the water.

"I've been going to my relative's house in Visalia," said resident Rebecca Quintana. "The water pressure drops in the afternoon when everybody is coming home from work. And you can't boil the water. You can't drink it."

A $45,000 emergency grant from the state Water Resources Control Board will cover the cost of bottled water while the next interim measure is completed.

The next measure later this year is installation of a vending machine to dispense filtered water to town residents.

The state water board would provide $96,416 to buy, install and maintain the machine for three years. County leaders are still working out details to allow only Seville residents to use the water.

Another measure would include a 15,000-gallon storage tank to help Seville through low-pressure days. The $78,500 needed for the tank would come from the California Department of Public Health.

For the long-term, the idea is to drill a new well and consolidate water service with another nearby community, Yettem. Maria Herrera of the Visalia-based Community Water Center, which advocates for many towns, worries about securing a site. She said negotiations for a well site with a willing landowner have been slow.

"If we are unable to meet his needs, we will have to seek the assistance of farmers," she said.