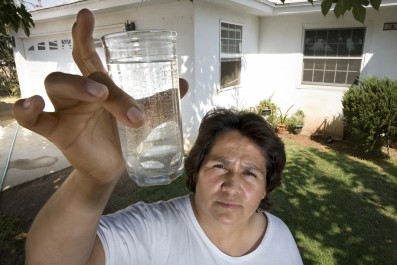 Today, in California, hundreds of thousands of families do not have access to safe drinking water in their homes, schools, or workplaces. According to the California Department of Public Health, public drinking water systems deliver water with unsafe levels of contaminants to approximately 1.5 million California residents every year, and this estimate does not include the millions of Californians whose water comes from unregulated private domestic wells (CDPH, Annual Compliance Report – Appendix C, 2011). Ensuring a safe, clean, and affordable drinking water supply is a major challenge, particularly for rural communities in California’s Central Valley.

The vast majority of California’s $39 billion agricultural economy is based in the Central Valley, which possesses some of the most fertile farmland in the world and produces a literal cornucopia of citrus, strawberries, grapes, lettuce, almonds, and milk. However, this bounty comes at a steep price. More than half a century of intensive industrial agricultural practices, including intensive fertilizer and pesticide application and the massive influx of mega-dairies to the region, has transformed the Central Valley’s aquifers into a toxic stew of nitrates, pesticides, and pesticide byproducts. Many of these toxins continue to remain in the environment for decades after their use has been discontinued.

This is the water that more than 50% of the Central Valley’s population relies on for domestic usage, including for drinking, cooking, and bathing (CA Water Boards, Groundwater Quality Protection Strategy, 2010). In the arid San Joaquin Valley, which covers the southern half of the Central Valley, groundwater provides up to 95% of domestic water supply (Balazs et al., Social Disparities in Nitrate Contaminated Drinking Water in California’s San Joaquin Valley, 2011). The primary contaminant affecting the region’s domestic water supplies is nitrate, and other common contaminants include arsenic and other heavy metals, coliform bacteria, dibromochloropropane (DBCP), traihalomethanes, and uranium. Consuming water with these contaminants causes severe health impacts. For instance, nitrate at such elevated levels as found in the Valley can cause death in infants less than 6 months old in a matter of days and the birth of stillborn babies. It has also been linked to cancer and illnesses of the gastrointestinal tract and endocrine system in adults.

In addition to the acute health risks associated with the Central Valley’s water contamination, communities face the disproportionate economic burden that stems from a lack of basic urban water infrastructure. Residents are often forced to pay twice for water, having to purchase bottled water to supplement the unsafe tap water delivered to their homes. These drinking water costs alone can amount to as much as 10% of a household’s income (Pacific Institute, The Human Costs of Nitrate-Contaminated Drinking Water in the San Joaquin Valley, 2011). As a result, the most impoverished residents of these communities at times must choose between buying bottled water or risking exposure to contaminated water so they can afford other necessities such as food and medicine. In disadvantaged communities where residents have been successful in installing modern water treatment and storage facilities, families struggle with the exorbitant water bills that accompany their infrastructure improvements. Consequently, some Central Valley communities have been forced to shut down their new water systems due to their inability to pay for operation and maintenance.

Historical settlement patterns stemming from farm labor migration, lack of public transportation, racially exclusionary covenants, and discriminatory planning and public investment policies, among other factors, have resulted in a persistent and widespread pattern of small, under-resourced and under-served communities in rural, unincorporated areas in the Valley. The majority of residents living in these disadvantaged communities are low income people of color, many of whom spend their days working on the same fields and orchards that are responsible for the water contamination they face at home. For decades these communities have been continuously and deliberately excluded from full participation in their local water decision-making governance. In recent years, however, community residents have begun to challenge these systems of disempowerment with a grassroots movement for environmental justice.

To learn more about the Community Water Center’s strategies to address the multiple barriers that impact the Central Valley’s drinking water, please see our Model of Change and Our Work.