Our first annual Water Justice Leadership Awards was a great celebration! We were thrilled to be joined by so many supporters as we honored Joanna Mendoza, Jesus Quevedo, Senator Fran Pavley, Assemblymember Anthony Rendon, Jennifer Clary, and Martha Guzman-Aceves.

Joanna Mendoza joined the AGUA Coalition at age 11, and she has demonstrated her dedication and commitment to water justice ever since. Joanna grew up in an unincorporated community in Tulare County, where she faced the reality of water contaminated with the pesticide dibromochropropane (DBCP). Joanna has shared her story about growing up in a community without safe drinking water far and wide. She testified in the State Capitol for the Human Right to Water, traveled to New York City  to participate in a convening of over 20 young people from around the country working on environmental justice issues, and educated peers across the country as part of the Our Thirsty World documentary by Nickelodeon News. Joanna is currently a freshman in college at California State University, Fresno, and she continues participating in AGUA meetings and contributing her time and wisdom to the movement. She co-founded Youth for AGUA to increase youth involvement in the water justice movement.

Jesus Quevedo is a lifelong activist committed to environmental and social justice. He is a resident of Cutler, California, where he has played a key role ensuring that local water board meetings materials are translated into Spanish and that professional translators are available upon request for meetings to ensure that local residents can understand decisions affecting their water quality and affordability -- and participate in meetings. Jesus

Quevedo is a Founding Member of la Asociación de Gente Unida por el Agua (AGUA Coalition). In addition to his leadership as an integral member of the AGUA Coalition and a long-time United Farmworkers activist, Señor Quevedo also founded Vencinos Unidos, Neighbors United, which works in the communities of Orosi, East Orosi, and Cutler. With Vencinos Unidos, Señor Quevedo was instrumental in stopping a discriminatory policy by the local Orosi water board that charged a water capacity fee of $685 to households where people lived with non-immediate family members. Señor Quevedo worked together with Vencinos Unidos to successfully blockthis policy and he continues to fight for safe and affordable water for Cutler residents and all Californians.

In 2014, Senator Pavley authored a package of historic legislation with Assemblymember Roger Dickinson (Sacramento) to manage California’s groundwater resources. Groundwater represents 40 percent of California’s water supply in normal years and up to 60 percent during droughts, but California is the last western state to systematically manage this resource. The legislation sets sustainability targets and creates a framework for locally driven groundwater management, focusing on the most distressed groundwater basins.

Senator Pavley also worked with the Assembly Water, Parks, and Wildlife Committee’s chair, Anthony Rendon, and other colleagues to place a bipartisan water bond on the November ballot. She advocated for investments in strategies that increase regional self-sufficiency, such as groundwater cleanup and recharge, water recycling, and storm-water capture and use.

Senator Pavley’s past water policy successes include passage of SBX7-6 (2009), which established the first statewide groundwater monitoring program, and SB 918 (2010), which requires streamlined public health criteria for recharging aquifers with recycled water (adopted in 2014), and a feasibility study of potential health criteria for the direct potable re-use of recycled water (pending). In 2015, Senator Pavley introduced SB20, continuing her efforts to improve groundwater use information, accountability and management in California.

A native of Los Angeles, Senator Pavley worked as a public school teacher for 28 years, was the first mayor of the City of Agoura Hills, and served for four terms on the city council.

Assemblymember Anthony Rendon represents the 63rd Assembly District in the California State Assembly. The 63rd Assembly District includes nine cities in southeast Los Angeles County. During his first term in office, Rendon chaired the Water, Parks, and Wildlife Committee and authored Proposition 1, the $7.5 billion state water bond, which voters passed by a 67% to 33% margin in the November 2014 election. Now in his second term, Rendon chairs the Utilities and Commerce Committee, and serves on the Water, Parks & Wildlife, Natural Resources, Public Employees, Retirement and Social Security, and Appropriations Committees. In addition to the water bond, Rendon passed bills on a wide range of topics in his first term, reflecting his interests in early childhood education and the environment. Rendon passed Assembly Bill 2403, which streamlined stormwater capture programs and facilitated water conservation in California. Prior to serving in the Assembly, Rendon was an educator, non-profit executive director, and environmental activist.  He led Plaza de la Raza Child Development Services, Inc. as Executive Director. Before working at Plaza, ​​​​​​​​​​​​​​​​​​​​​Rendon served as the Interim Executive Director of the California League of Conservation Voters (CLCV) from 2008 to 2009. ​Rendon holds a Ph.D. from the University of California, Riverside. He resides in Lakewood with his wife Annie.

Jennifer Clary has served as a water policy and legislative analyst for Clean Water Action (CWA) since 2003. She directs CWA’s Central Valley Program and serves on key state stakeholder committees, where she advises state agencies on actions to improve groundwater quality and allocate state funding for water infrastructure. Jennifer helped establish the first regulatory program to protect groundwater quality from 7 million acres of irrigated agriculture. She also helped move the state Division of Drinking Water from the California Department of Public Health to the State Water Board. In 2014, Jennifer played a key role uniting diverse and independent-minded environmental and environmental justice groups behind groundwater legislation, and she successfully moved technical drinking water and wastewater language into the Water Bond. In her time with Clean Water Action, Jennifer Clary has played a vital behind-the-scenes advocacy role shaping the drinking water and wastewater funding and protection programs we have today.

Martha Guzman-Aceves serves as Governor Brown’s deputy legislative secretary for Environment, Energy, Water, and Agriculture. Martha has long been a leader at working with the farming community to both improve conditions for workers and recognize and promote best practices on California’s farms and ranches. Prior to joining the Governor’s Office, she was previously an advocate with the California Rural Legal Assistance Foundation, a nonprofit legal services and advocacy organization founded in 1981 to improve rights and opportunities for California’s immigrants, their families and communities.

Martha works tirelessly for environmental justice. Martha has worked to get over $6 million in interim solutions funding for communities and schools without safe water, $15 million in emergency drinking water funding in 2014, and millions more for pilot projects and planning projects in the Tulare Lake Basin and Salinas Valley to develop solutions that will last. Since Martha’s appointment to Governor Brown’s Office, California has adopted the Human Right to Water as a guiding water policy of the state, which guided the passage of historic groundwater legislation and the authorization of over half a billion dollars in Water Bond funding for small, low-income communities. Martha is a natural strategist and visionary, always able to keep the big picture and “long game” in mind, and bridge her own moral compass that is rooted with communities and sustainability and make it work within the practicalities of politics.

Special thanks to our event sponsors and host committee! 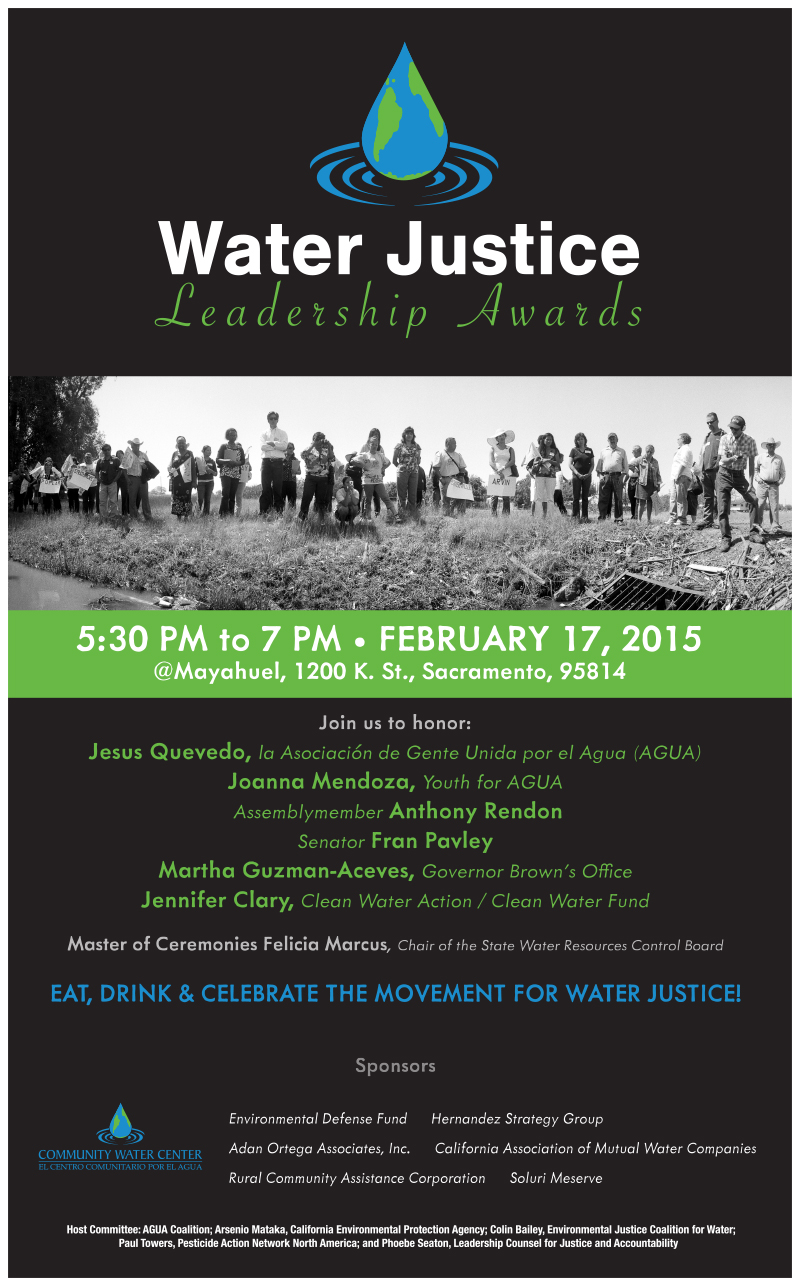