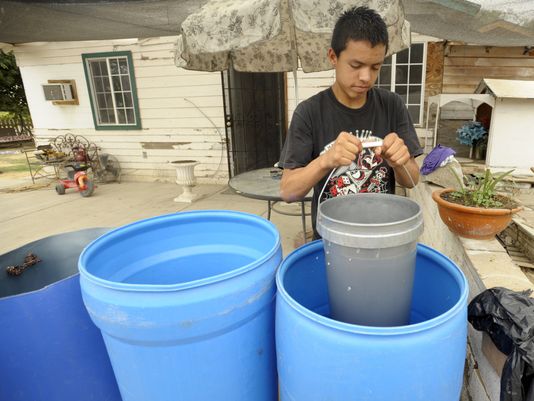 MONSON – For Ben and Lazara Luengas, their latest water problems began about seven weeks ago.

Lazara — or "Lala" to her friends — had just washed four loads of laundry without any problems, but then her husband heard that the well pump next to their north Tulare County home of 40 years didn't sound right.

A check of the pump revealed that it was no longer drawing water from the private well under the property.

"And we panicked," said Lala, who had heard over the couple of weeks prior to that day that two neighbors' wells also had run dry as a result of the Valley drought. "What can we do? Pray? Oh, help me Lord."

Actually, help came from a next-door neighbor whose well still has water and let the couple connect a hose from his pump to their home, giving them water to wash dishes, shower and flush their toilets.

But some other neighbors in this tiny patch of streets where more than 30 families live haven't been so fortunate.

Finding dirt instead of water

Within the past couple of months, residents here said they've heard of at least eight homes with wells that have run dry, and those residents who haven't lost water are worried their wells will fail soon as the drought worsens and cities and farms draw increasingly on groundwater.

"One day we tried flushing the toilet and nothing but dirt came up," she said. Galdys Colunga, who lives one street over from the Luengases, said her husband and six children have been without water in their home for about a month and a half.

Colunga's husband tried lowering their below-ground pump — which had a pipe that already went 68 feet deep into the aquifer — but it hit bottom with no more water there, she said.

"It's a hard situation with six children," said Colunga, whose husband, a field hand, has been filling 50-gallon plastic drums with water daily at friends' homes so the family has water for its household needs. That includes providing water for her home's swamp cooler, which is particularly important to run during the current heatwave.

Showering consists of using a cup to scoop water out of a bucket in the shower and splashing it on her head and body, she said.

Even before the wells started going dry, Monson residents had to buy drinking water because of nitrate contamination that made made their well water unhealthy to drink.

And many in this mostly low-income town said it has been difficult to afford paying for filtered or bottled water for cooking, drinking and brushing their teeth.

They also have to bear the expenses and inconvenience of taking their laundry to laundromats or the homes of friends and family to wash their clothes.

"I'm very worried the water's going to run out, because water is life, water is family, water is everything," said Andrea Gonzalez of Monson, who still has water but is finding dirt in the filters of her washer and sink taps, which could be a sign her well is running low.

If their well runs dry, she said she and her family have no way to bring barrels of water to their home, as the Colungas do, but when push comes to shove, you figure it out, she said in Spanish.

Unfortunately, the sort of problems Monson residents are having with their wells are occurring in growing frequency across Tulare County.

"Now with the drought conditions, there have been a number of wells dry now," said Maria Herrera, community advocacy director for the Community Water Center, a Visalia-based non-profit that advocates clean drinking water for communities and provides education and legal support.

Denise Akins, an administrative analyst for the county, estimated that county officials have received reports of at least 82 private wells that have gone dry, with some of the highest concentrations in Monson, East Porterville, as well as on the outskirts of Visalia and Tulare.

Water problems aren't unusual in rural parts of the county, but dry wells can be a particularly tough for people with private wells — which all Monson and East Porterville homes are connected to — because they often have to bear all the costs to fix or re-drill wells.

The Luengas said they've been told drilling a new well on their property could cost them about $15,000, and maybe more, which Ben, a retired field worker, and Lala, a retired teacher's aide, can't afford on their fixed incomes.

Even if they could afford it, they've been told that well drillers are so backed up with work that it may take up to a year-and-a-half to get to their house.

In the meantime, Monson residents are hoping for some help.

"What can we do? We want somebody to lend us money to drill a new well," said Ben Luengas. But he and his wife aren't hopeful.

'Nobody solves the problem'

For more than two decades, Monson residents have been discussing their water problems — mostly about the contamination — with county and state officials.

There have been promises by politicians that something would be done including talk of creating a community water system so Monson residents wouldn't have to depend on private wells anymore. "But nobody ever comes to solve the problem," Ben Luengas said.

This, however, is the first time the Luengases have heard of wells running dry in their town.

Besides hoping for a far wetter winter than the latest one — among the driest in California history — some residents with private wells are hoping for at least temporary relief through state funding for a program to deliver clean water to homes.

Akins confirmed on Tuesday that the California Water Resources Control Board had approved a $500,000 grant for Tulare County to pay for 50 gallons of bottled water to be delivered to eligible homes by one or more existing water-delivery businesses.

But not all homes without water will be eligible, because the service will be available only to households in the unincorporated county where individual or community wells have run dry and also are contaminated.

In Monson, every home without water may meet those qualifications, but in some other areas they may not, Akins said.

Herrera said she wants the county to begin the deliveries right away, but Akins said before that happens county officials want to have written authorizations in hand and clarification by the state — which is starting this water-delivery program for the first time — on how to certify that water systems are contaminated, both of which could take weeks.

In the meantime, Herrera said, county officials are referring people whose private wells have gone dry to U.S. Department of Agriculture programs that offer loans to drill or repair wells.

She and Herrera noted that these federal programs have eligibility requirements that not all people with well problems will meet, including that their properties are in designated as rural and they they meet low-income requirement.

Akins said that Visalia-based Self-Help Enterprises is offering individual, low-interest loans for well replacement up to $11,000, but has just a $100,000 USDA grant available to pay for this.

They also have to be credit worthy to apply for the grant money, as it is a loan, Akins said.

For information about U.S. Department of Agriculture Rural Development programs to help people with damaged or dry wells, call 734-8732.

To access assistance program offered by Tulare County and other local agencies, dial 211 to connect.

(PHOTO: Residents of Monson have been running out of water in their wells over the last few months. The Colungas are one of the families without well water. Jorge Colunga fills up two 50-gallon barrels with water every day at a friend or relative's house. These two barrels supply the family of eight with shower water, toilet flushing water and dish washing water. Pictured- Son, Luis Colunga, 15, pulls a bucket of water to flush the toilet. Credit: Steve R. Fujimoto)